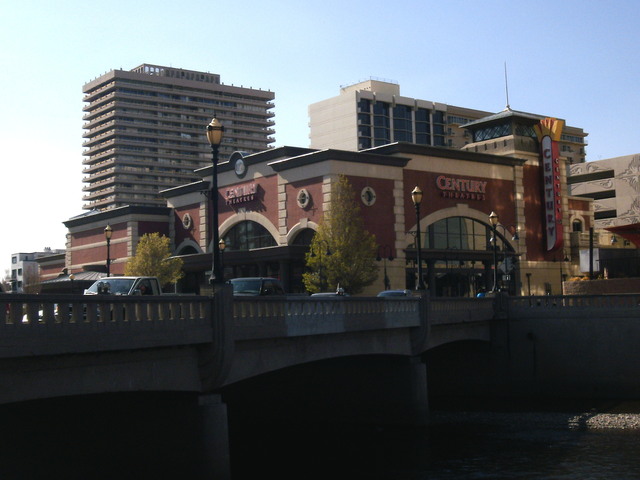 Theatre project was started and nearly completed by Regal Cinemas. Before opening the project was taken over by Century Theatres. Most every aspect of the interior is a Regal Cinema; seats, carpets, curtains, snack bar etc.

Benson & Bohl Architects designed this theater for Regal Cinemas. There is a small but recognizable rendering of it on this page of the firm’s web site.

Did this actually open as a Regal? One of those pictures at Benson & Bohl makes it look as though perhaps it did. I remember interviewing at Century’s Home Office in September 2000 and seeing plans for changing the signage, but I was under the impression that it never actually opened as Regal.

It’s possible that Century took over the project after the Regal signage had been installed but before the theaters had opened. That view with the crowd out front does look like it would be opening night, but it might be one of those very realistic digital renderings. In the daylight photo with the Regal name on the building it doesn’t look like the theater is open.

Benson & Bohl reconfigured their web site and the link I posted earlier no longer works. Maybe this one will stick around longer.

November 12th, 1999 grand opening ad, Scott, you are right about Regal opening this cinema. Century also placed an response ad in the paper.

Became an Century theatre on January 28th, 2000. The Syufy family must had written Regal quite a large check.

If I recall, there was discussion at the time for Regal to bow out of Northern California by selling the Natomas 16 and Deer Valley 16 to Century as well. My guess would be that the May 2000 opening of Hacienda Crossings 20+IMAX helped Regal decide to stay.