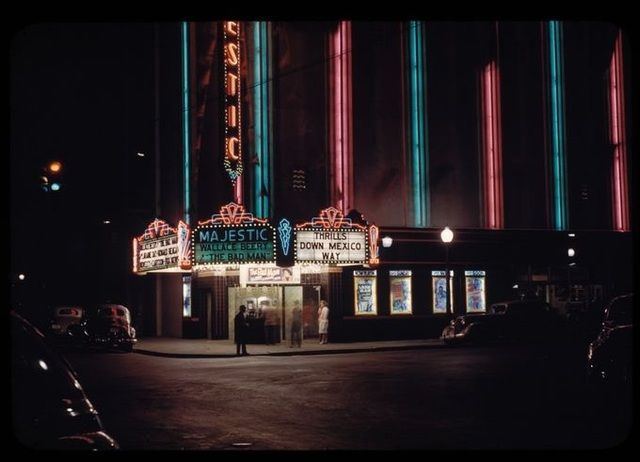 The Majestic Theater was probably slightly smaller than the Granada Theater, and was located on East First Street, immediately to the east of the Mapes Hotel. It was opened March 1910. By 1931 it was part of the T & D Jr. Enterprises chain out of San Francisco, CA. The last time I visited it was in 1944 and at that time the presentation curtain was still being used.

The Majestic Theater was closed in 1975.

For those of you curious enough to track this 1952 crime drama “The Captive City”, The Majestic can be seen prominently in the background in an early opening scene filmed in Reno where much of the movie was filmed. It looked very much like the description of it posted in the comments section on The Nevada Theatre /theaters/14649/ It looked ornate from the outside and had a huge Majestic Theatre Marquee vertically up the front of the building. It looked nothing like the description of the Majestic posted by robertgippy above. Perhaps it suffered a remodel later on. The film showing was one with Bing Crosby but I could not make out the title. The filming in Reno was briefly discussed in this article at TCM

The Majestic in Reno was not a flat single story theatre, nor was it smaller than the Granada. It was huge to the point of dwarfing the Granada! I saw South Pacific there, Exodus, and many, many double features as well. The epoch movies of that day were often four hours long, so those never had a second feature, but always a newsreel and a cartoon or two. The bottom was a flat huge plush deck covered in many rows of chairs, and swept up into a very large section of the best seats to view that giant screen which were called Loges. Those were the best seats which would lean back for luxurious comfort, and were situated just far enough back for you to see the huge screen well. The loges cost more than the General tickets and we children would often sneak down after the movie started, and sit in the empty ones until the ushers caught us and made us move to the floor seats or the balcony which cost the same as the floor seats. The balcony was better for viewing the giant screen though than the floor seats even though it was far away. The Majestic had layers and layers of curtains which swept open one layer at a time, two layers that opened out to the sides and one fab one that pulled upward like a giant Balloon shade. It was transparent and magical looking as they pulled it open. I hope I never forget that spectacular sight. I actually recall three curtains in all., first one heavy velvet drape, and then one satin, then the transparent one. There were cut glass wall sconces and velvet/ corduroy seats and Victorian everything. It was very old, and very, very beautiful. Above the floor seats, and the loges, accessed by the same steps was the balcony. I have had the best kiss of my life in that very balcony, so I remember it well. That theatre was aptly named, and truly was The Majestic Theatre. It was mostly red colored decor inside. The Granada had the Green interior, and was beautiful but much smaller. I remember how it looked because I was an adult driving by when they tore it down. The front of that old dream filled building was torn away, and I couldn’t help but gasp! You see, I saw them! The seats we sat in when we saw Sparticus, the theatre we all grew up in, were just hanging there as if they didn’t matter at all. Like nothing had ever happened in there, and nobody had ever sat there and learned about foreign lands and castles and ancient stories re-enacted. And so it goes. There is a parking lot there now. And a very ugly, ugly one at that.

The entire Majestic Theatre/Mapes Hotel block is now a public cement park with nothing more than a few benches and some shrubs scattered about. It is also the part time arena for the ice skating rink. Two beautiful buildings demolished for this, very sad.

The Granada Theatre was open until 1997 (operated by UA) when the flood hit Reno and making it impossible to renovate any building in that immediate area. Everything was torn down. A beautiful high rise condo building stands where the Granada was, a typical looking 12 screen Century Theatre sits on the other side of the street.

The Majestic Theatre in no way can be compared to the single level Northpoint Cinema in San Francisco which only had one level on a slightly sloping concrete slab with poor sightlines as a result. The Majestic had a balcony and also,when I was a teenager in the fifties, they did sometimes show twin bills. Some of the postings here also seem to place it on the wrong side of East 1st Street. It was on the south side with its stage housing smack dab against the narrow street that ran between it and the Truckee River. Loges separate from the balcony?? If your poster is saying that, I do not remember that. The front rows could have been referred to as the loge as they were separated from the other rows of seats by a cross aisle. I think they costs more then regular balcony seats.

The September 8, 1931, issue of Building & Engineering News reported that contracts had been let for the remodeling of the T&D Jr. circuit’s Majestic and Granada Theatres in Reno:

The finding aid for the papers of architect Frederic J. DeLongchamps lists five theater projects, but doesn’t give locations or dates. The houses listed are the Majestic, the Hunter, the Rex, the Quincy, the Roxie, and a “T.D. Theater” (perhaps the Granada, which the aid doesn’t list by name.)

This weblog post says that the Majestic had also been remodeled in 1925, again with the plans by DeLongchamps.

BTW, that photo above which purports to be the Majestic Theater, in no way resembles the Majestic in the fifties and sixties when I lived there. It might be the old YMCA but even then the building next door does not look familiar. We will certainly have to find a better picture for this site.

We do need a better picture. The Majestic was in the building to the left of the YMCA. The picture shows just a bit of the original marquee. The building was probably remodeled in later years.