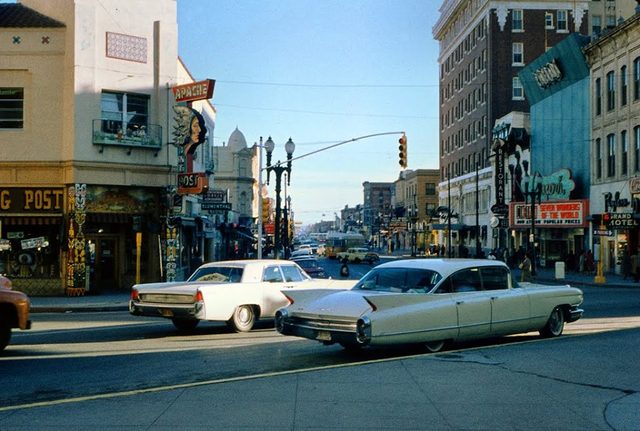 The Ellanay Theater opened November 9, 1918. A Hope-Jones Wurlitzer theater pipe organ was installed. By 1941 it was operated by Paramount Pictures Inc. through their subsidiary Hoblitzell & O'Donnell. In 1957 the Ellanay Theater was operated by the Trans-Texas Theatres chain. It was renamed Capri Theater on February 24, 1961 and on November 8, 1961 it was renamed Capri Cinerama, which lasted until January 1975 when it was taken over by Movie One Theatres and was showing movies until closure on March 26, 1983 with “Pink Flamingos”. The building was subsequently demolished in August 1983.

Photos show pressed tin patterns on walls, a later dropped ceiling and some ornate columns and decorative plaster, with many layers of white paint.

A book called Spirits Of The Border: The History And Mystery Of El Paso Del Norte says that the Ellanay Theatre opened November 8, 1918, with a seating capcity of 940. The original owners were J.M. Lewis and Victor Andreas.

“The Los Angeles Pressed Brick company is finishing a unique piece of colored terra cotta work for the Ellanay Theatre at El Paso, Texas. It is a decorative panel, 14x25 feet, to be installed in the vestibule over the main entrance. The panel was molded in two sections, later to be cut into subdivisions before burning. It is a portion of two carloads of terra cotta which the company is furnishing on this contract.”

I believe that the remains of this terra cotta panel can be seen in this photo from the time of the theater’s demolition (this is one of the 14 photos Lost Memory linked to in the sixth comment on this page.)

The fact that a Los Angeles tile company was chosen for this project suggests that the architect of the building might have been a Californian familiar with their work. The Los Angeles Pressed Brick Company was the leading producer of face brick in Southern California during the early 20th century, but the product itself was produced by many companies throughout the nation, including Texas. A Texas architect would probably have been more likely to use a closer source. So far I’ve had no luck tracking down the name of the Ellanay’s architect, though.

Candy, soda and popcorn was sold to the right as you entered the theatre. There was also another entrance on El Paso Street with a small area and counter where one could buy without going into the theatre. Guys would go in that entrance to talk to the girls who worked there. To keep the guys out, the manager finally put up a sign which said “If you have nothing to do, please don’t do it here”. (It did not keep the guys out).

This opened as Ellaney on November 9th, 1918. grand opening ad in the photo section. 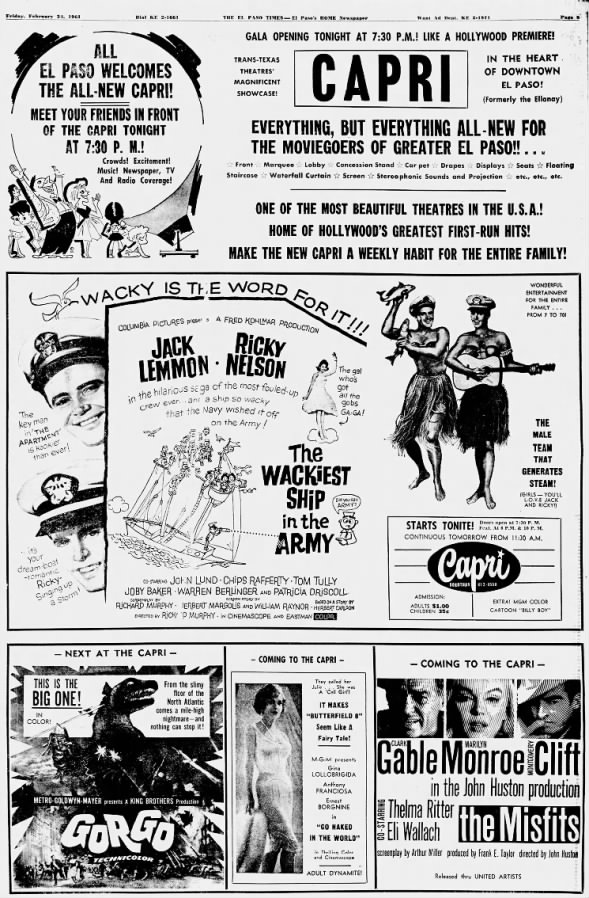 2011 article with re-use of the frieze from the theatre.

J.M. Lewis and Vincent Adreas launched the Ellanay on November 9, 1918 as a fusion of their last initials, L&A. The opening film was propaganda title, “Stolen Orders.” The Ellanay was probably best known for its striking Terra Cotta exterior known for its bas-relief visualization entitled, “The Dance” by architect Huss M. Beutell.The Ellanay’s Hope-Jones Organ did not arrive at the opening but would get its own “grand opening” styled promotion and is featured in photos. Dent Theatres Circuit took on the venue and It became only the second theater in Texas to get a “permanent” Vitaphone system for sound films. Dallas' Arcadia Theatre had been the first. The Ellanay installed its new $20,000 system for talkies beginning with in February of 1928 leading to its successful multi-week run of “The Jazz Singer.” The next year Paramount-Famous-Lasky took over the Dent Theatres in El Paso.

Paramount sold/transferred the theatre to Texas Consolidated in 1936. The circuit closed the Ellanay for a major refresh relaunching on Valentine’s Day 1941. Soon Texas Consolidated consolidated under the name Interstate Theatres. During the Paramount Decree, the Ellanay was one of many locations divested by Interstate which Trans-Texas took on. This was effective September 3, 1954. Trans-Texas upgraded the facility to widescreen for CinemaScope presentations. It then did the shocking transformation in 1961 to the Capri Theatre covering the theater’s detailed interior work with a drop ceiling and lots of paneling. Likely at end of a 20-year leasing agreement, Trans-Texas dropped the Capri in January of 1975.

Movie One Theatres took on the venue changing the venue policy to a sub-run dollar house in 1975. It vacillated between low-price first run and suborn in the 1970s before its final era as a sub-run grind house showing double and sometimes triple features. The theater’s final booking was a four-wall weekend screening of “Pink Flamingos” on March 25 and 26, 1983, arranged by sculptor Ho Baron, then a student at UTEP. The removal of the 1961 refresh during the August 1983 demolition uncovered the largely untouched architectural splendor of the original Ellany Theatre and architect H.M. Betell’s detailed work.

As near as I can puzzle out from the sources on the Internet, Huss M. Beutell must have been the half-brother of Russell L. Beutell of the Atlanta firm Daniell & Beutell, architects of at least three theaters in Georgia.

The Capri also installed Cinerama later that year in 1961, reopening on November 8 of that year with their test film “This Is Cinerama” as the “Capri Cinerama”.