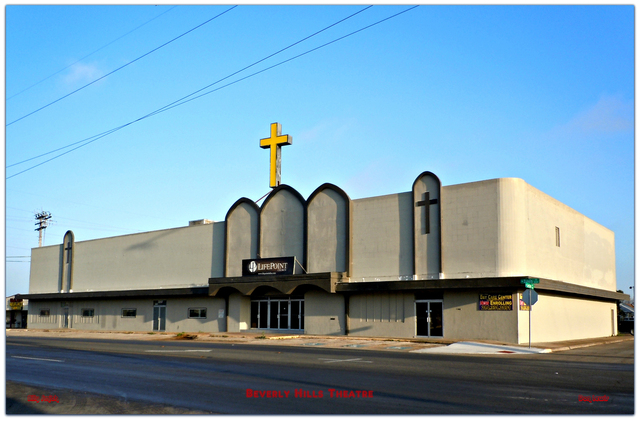 The Beverly Hill Theatre was opened August 31, 1944. After closing as a movie house, the Beverly Hills Theatre, located on West Davis Street at North Jester Avenue housed a church.

Another issue of Boxoffice Magazine, from December 2, 1944, has an article about the McLendon circuit, and it says the circuit’s new Beverly Hills Theatre was already open, so late 1944 would probably be the correct period for the opening. The company was able to get construction materials during the war because the theater would serve workers at a major aircraft factory nearby.

The article also said that the architect of the Beverly Hills was Raymond F. Smith. The style was Art Moderne.

I worked at the BEVERLY HILLS both at the door (taking tickets) and in the parking lot. Both were most always packed. There was a drug store next door east on the corner.

In 1929, the Beverly Hills neighborhood was annexed from Dallas and 15 years later, it had its own movie theater: the Beverly Hills located in the Beverly Hills Shopping Center. And the B-H would be the subject of a prickly legal battle by Tri-State Theater’s Bart McClendon just four years after its August 31, 1944 grand opening. A rare wartime opening, the movies-for-morale requirement was met by an aviation plant manufacturing wartime materials in Grand Prairie roughly eight miles from the theater.

The B-H opened with “Broadway Rhythm” to an invitation only audience and then to the general public on September 2, 1944 with “Lassie, Come Home.” The 812-seat balcony-less theater was designed by Raymond F. Smith who had architected other theaters including Dallas’ Granada, Airway, and Delman. Having moved to Dallas in 1942, McLendon was hoping for big profitability from the B-H and Casa Linda that opened the following year. But falling into debt with the local banks and with his son needing a cash influx to get into the radio business, he sold off the B-H and its shopping center on June 10, 1947 to Robb & Rowley’s theater circuit for $300,000 and would also sell the Casa Linda to Interstate Theater Circuit.

Less than a year later, McClendon sued both Rowley and Interstate for $1.2 million claiming that he had essentially been frozen out of the first-run film exhibition marketplace by Rowley and United leading to $200,000 less business and $200,000 less marketplace value for his theaters. He felt that the business climate was such that he was forced to sell this theaters. He lost his suit as, among other elements, McLendon admitted to making $50,000 profit in the sale of the B-H, alone.

The B-H changed from a second-run suburban to an art cinema on January 6, 1952 closing briefly for a remodel. “Oliver Twist” opened the new art house. This policy lasts until 1960 when it closed as a movie house and new owners decided to try for live theater in the space. In January of 1961, the Beverly Hills is used for live stage plays. At some point the Beverly Hills became a place of worship, renamed and was still in operation as of the 2010s.

The Beverly Hills Theatre was built for the Bart R. McClendon circuit, opening on Thursday, August 31, 1944. It was designed in the Art Moderne style by architect Raymond F. Smith, who was also a builder. The auditorium had seating for 812, all on one floor. The McClendon circuit would sell the Beverley Theatre to a company owned by Gene Autry in 1948. Around 1951, the theatre would change hands again when it was aquired by Robb & Rowley of United Artists.

After the theatre closed, it operated as a church of some kind or another for some 50-years. During the late 1960’s to the early 1970’s, it was known as Souls Harbor. Later it would become the LifePoint Church. Today, it’s the Templo De Poder Y Dozo — Spanish Assembly of God Ministries.

I question dallasmovietheaters' assertion that Bart McLendon sold the Casa Linda to Interstate; if that were so, there would be some evidence such as, among the more easily verified, the C-L’s name grouped with those of other Interstate theatres' in the entertainment section of the DMN and the DTH. I don’t believe that was ever the case. A quick check of the DMN archives by anyone who has a NewsBank subscription should clear this up.

Ha-ha, no, of course not, hdtv267! Seriously, the person posting as dallasmovietheaters has done a tremendous job of documentation on theatres throughout the Dallas area, and also with photos. As far as I can tell he (I guess, maybe she) is usually spot-on with facts. That’s why this one snagged me. I thought I knew everything about the Casa Linda…still think so!