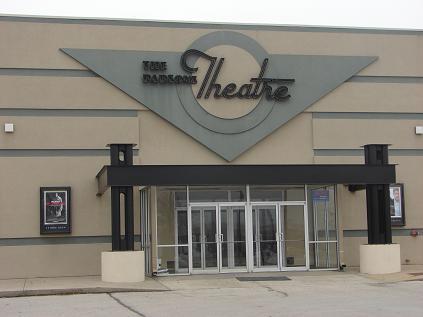 The Parsons Theatre is a modern 5-screen complex which opened on December 15, 2000.

Very nice, if not sparse, five-plex in this Southeast Kansas town. This was built to replace the previous Parsons Theater, which suffered damage from the 2000 tornado that affected much of downtown. I’ll try and post links to pictures of the current theater and the previous site.

One cool thing: the current owners (who are almost always on hand to chat with) have salvaged what seems to be a part of the original theater’s marquee. It presides above the concession stand in the new theater.

According to the caption of a photo in the book “Parsons,” by David Mattox and Mike Brotherton, this multiplex was built shortly before the April, 2000, tornado struck, and had been in operation less than six weeks when it was destroyed. The owners rebuilt on the same site.

According to the same source, the original Parsons Theatre (the one in the 1985 photo Chuck linked to,) which had been rebuilt following one fire in 1943, was destroyed by another fire more than 50 years later, and was subsequently demolished.