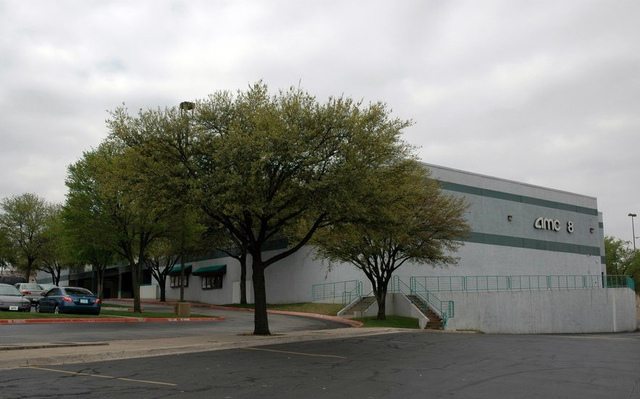 The AMC NorthPark 8 opened on November 10, 1988 as the AMC NorthPark 8. Unfortunately General Cinema already operated two theaters in the area with similar names: the popular NorthPark 1 & 2 and the NorthPark 3 & 4. After GCC put up a fight, the name was changed to AMC Glen Lakes 8 on December 30, 1988. AMC then put out a new motto for its new name: "So you won’t be confused when searching for the best."

I’ve just submitted 4 Photos of the Glen Lakes AMC Theatre on my flickr site. View link …
or, www.flickr.com/photos/racphotography
This Theatre has been closed for about a year and a half now.
I believe it is still sitting idle today.

I went there several times after it first opened, loved the seating!
Hated how the theater was positioned though, and the road getting into it was a bit dodgy as it was situated close to a a very busy intersection and you had to be careful that you didnt get rear ended by someone.

Damn megaplexes! I saw John Woo’s “Hard Boiled” here as part of the USA Film Fest. Also saw “The Rocketeer” and they had a carnival in the parking lot to tie in with the film. Last flick i saw here was “Jarhead” in 2005.

This Theatre no longer stands. It was demolished a few months ago..

When Trammell Crow leased a space to AMC to build a new eight-screen theater in the lucrative Central Zone of Dallas film exhibition, the battle lines had been crossed. AMC had been a peripheral player in the Dallas market with nondescript multiplexes in outer Dallas neighborhoods. But to build adjoining Crow’s Glen Lakes Tower in a tight two-acre spot within the Central Zone was quite another thing entirely. While it had just landed in the periphery of the Zone when it took over the boutique neighborhood Highland Park Village theater, the AMC NorthPark was going to be the chain’s destination theater. Everyone knew it was movie theater war. Within weeks of the AMC project starting, United Artists was completing terms on a tract of land to build its own multiplex walking distance from the AMC NorthPark. They were both trying to unseat General Cinemas which, itself, had all but done in the Plitt/Interstate theaters which had dominated the Dallas marketplace for decades.

The AMC NorthPark was completed a bit ahead of schedule with a November 10th, 1988, champagne buffet and premiere screening of A Cry in the Dark benefiting Dallas Cares, an AIDS support group. The theater opened to the general public a day later. Two of the eight auditoriums seated 500 patrons and two more seated 400 each. Those four theaters were stadium-style seating which was supposedly one of the first five theaters in the country to have that many stadium seating houses in the same complex. Seating capacity in the sloped seating theaters ranged from 200 to 300 seats. The theaters had Sigma Torus Compound Curved Screens and AMC would brand the theaters as High Impact Theater Systems or HITS. (Obviously unimpressed, it didn’t take long for the neighboring General Cinema NorthPark to move the S to the front of that acronym for its disparaging take on its new competitor to the North.)

The bidding competition would heat up for the top films and AMC would change the name of its theater away from the NorthPark and to the Glen Lakes when a hue and cry was raised. A backroom settlement was reached between GCC an AMC which had the theater renamed as the Glen Lakes less than two months into its run. (Similarly, the planned UA NorthPark would become the Plaza upon its opening in May 1989.) Said an AMC ad upon its name change in January 1989, “So you won’t be confused when searching for the best.” Sell-out signs were common on weekends at the Glen Lakes. Traffic was tough around the theater in its hey day. Veteran AMC Glen Lakes goers had their own traffic routes to get to the theater. Some were patient and got in the line on the theater’s main entrance on the US-75 access road, others took the “secret” back entrance behind the Crow building, some through the Toys ‘r’ Us parking structure and then there was the Walnut Hill “overshoot” method north of the theater which wrapped around between the neighboring apartment complex and Toys ‘r’ Us.

Perhaps most impressive about the AMC Glen Lakes was its wide concession stand that had multiple positions with popcorn popping constantly and a team of workers who had to deal with massive lines of people quickly and graciously. In the Central Zone, employees had to bring their A-game. In the carnage of the new AMC Glen Lakes and the UA Plaza opening six months later were the shuttered Caruth Plaza, the downgrading of the UA Medallion to discount status, the UA Ciné’s move to full time art house and the UA’s Skillman’s large dropoff to the North of the Central Zone.

The Glen Lakes out-survived the General Cinema NorthPark which closed In October 1998 and the UA Plaza which closed in December of 2004. AMC had won the larger prize decimating (then buying the carcass of) General Cinema and all but eliminating United Artists in Dallas. The metroplex had become largely an AMC and Cinemark area. For AMC, the Glen Lakes was the catalyst of its aggressive and successful expansion. But over at the Glen Lakes, euphoria over such factoids would be tempered as AMC had already announced a new AMC NorthPark 15 theater to go inside the venerable shopping mall even prior to the Plaza’s departure. The writing was on the wall for the badly-aging Glen Lakes. The challenging AMC NorthPark project would finally open on May 5, 2006 at midnight leaving the AMC Glen Lakes in the dust as of May 4, 2006: the theater’s final screenings shy of its 18th anniversary. The property would become home to Dave and Buster’s which moved from its old location just across the street.

“The Rocketeer” was presented at the AMC Glen Lakes in 70mm 6-Track Dolby Stereo beginning on Friday June 21, 1991.

I first went to this theater when “Star Trek 6” opened. This theater didn’t have true stadium seating as seen in future theaters. It was a hybrid. With the front half of the auditorium being normal style seating with a gently sloping floor. And the back half being stadium style with a steeply sloping floor with steps. Unfortunately when combined with the curved Torus screen. Which was not perforated. Made for horrible acoustics. The screen was held in place with a vacuum system behind it. Causing all of the speakers that were normally behind the screen to be mounted in the ceiling above the screen. The sound system in these auditoriums would have a noticeable echo off the screen. The more empty the auditorium, the more noticeable the echo. The Spring before “Mulan” opened, there was an event held by the movie companies featuring their Summer product. This was for all of the local Theater management. Which I attended along with my GM. The event ended with a screening of “Mulan” in the main auditorium. Before the screening my GM and I went into the empty auditorium and I demonstrated the echo. I took out my theater keys and dropped them on the concrete floor in the aisle about midway up the stadium portion. And there was a very load echo. There were some other people in there at the time and they noticed also. As I have mentioned in another thread. The UA nearby opened as just “The United Artists” and later changed to the “United Artists Northpark”. But the term “Plaza had originally referred to the entire entertainment complex downstairs.

I have fond memories of this theater, which is a strange thing to have for a multiplex.

While living in Dallas I knew about the theater, but never had a opportunity to visit it until the Summer of 1995.

Finding myself unemployed, but with savings, I took the Summer off; Dedicating myself to bicycling White Rock, going to movies (alone or on dates), and just all around enjoying life.

For some reason that Summer a majority of the movies I desired to see were playing here, and so I spent many an afternoon, or evening here.

Another cool thing about this theater was that one could, after a movie, walk over to the arcade and/or Borrowed Money club over in Caruth Plaza(?) on Park Ln.

There was a Chilis restaurant near by as well that I became very familiar with.

In ‘96 I brought some friends here, who complained of the location’s “desolation,” until I showed him how we could park and then walk to various restaurants, and later, to at least two nightclubs. They were all mildly surprised.

There may have been a few more, but the three movies I saw here for sure were “The Ice Storm,” “The Last Days of Disco” and “Orgazmo.” What a trio. LOL