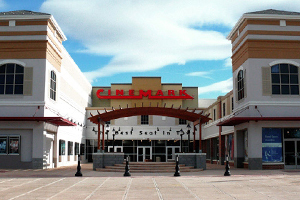 A November 1992 press release announced an anticipated Summer 1993 opening but it opened March 18, 1994. Planned in 30,000 square feet was a 10-screener with 1,900 luxury seats with cupholder armrests. A video game room near a multi-station concession stand was planned for the lobby.

December 30, 1998 press release announced that Cinemark would add six stadium style seating auditoriums to the ten screener. Expanded, the theatre would have 65,000 square feet, two box office stations, three concession stands, an ATM machine and a video arcade 3,000 seats, and stadium style seating in seven of the sixteen auditoriums. The stadium seating would be a sixteen inch height difference between each row, as well as a 48 inch difference between each aisle. Opening was anticipated by March of 1999. By 2020 the theatre had been fitted with recliner seats which reduced the total seating capacity to 1,304.

worked as a projectionist at the 16 in 2003 i still vist the theater from time to time, has a good selection of films and all the big midnight shows

View link
if this theater is affected, then AMC will have a huge hold on the South Jersey market.

Very classy redesign. The color scheme on the outside used to be flourecent green, black, white & red. Glad to see it sticking around. It’s a great place to see a movie (for a multiplex).

This opened on March 18th, 1994. Its grand opening ad can be found in the photo section.

This is a great theater and well run. I go there on a regular base. I enjoy the XD; Mad Max Fury Road was awesome on that screen. There is one drawback, the older theater have terrible sightlines, you have top sit in the back of the theater to avoid it’s slopping effect. The newer screens are perfect, theater 14, I believe is the best screen.