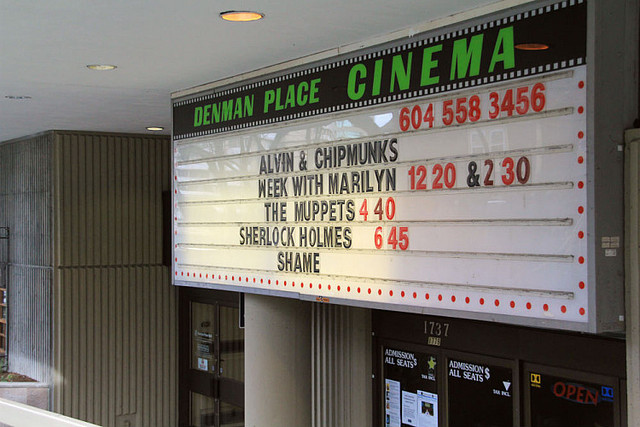 The Denman Place Cinema has been in its West End location for decades. It is immediately adjacent to the Denman Place Mall at Denman Street and Comox Street. It’s in one of the loveliest neighbourhoods in Vancouver, which boasts English Bay, restaurants of every description (from burger joints and fish & chip places to high end), bakeries and funky stores.

Opened in 1969, It was originally a Famous Players theatre that showed slightly edgier fare than the blockbusters that were normally booked downtown. (Richard Rush’s “The Stunt Man”, which possessed a glittering Oscar nominated performance from Peter O'Toole, played there - in an exclusive engagement - for nearly a year in 1980-81. “9 ½ Weeks”, with Kim Basinger and Mickey Rourke, was also there in the spring of 1986.)

In 1989 Famous Players abandoned it (as they did nearly all of their fabulous single screens) and under independent ownership it became a discount cinema on a permanent basis. Older relatives of mine attended frequently. It was exceptionally well kept back in the day with glittering black and white Art Deco style and mirrored walls.

It is the only local theatre that I’m aware of where the cinema is below street level. You walk through a door and then take the escalator down. But it is still a wonderful place to see anything that has completed its first run. It features triple bills during the week and four features on the weekend.

Does anyone know if this cinema is still open? I can’t find any showtimes online

I visited this cinema on vacation last year and loved the huge screen, good (but not great) sound, comfy seats, sharp projection and a great price for rep cinema. It’s a great escape from reality. :)

This theater is currently open again. They are running first run films.

Unfortunately this theatre is slated to close, once again, at the end of September, 2012. Rumor is it will be home to a new Dollarama store. Pretty sad.

Status should now be closed, as the cinema shut down on September 30th, 2012, and IS becoming a Dollarama. Now downtown Vancouver only has two cinemas (Scotiabank 9 and International Village 12) in operation.

The last theatre in Vancouver to have been situated underground. The others were the Broadway Twins and Royal Centre theatres.

Granville #1 and # 2 were located under ground as well.

Video of the auditorium shot during the end credits of the final screening (Back to the Future III). 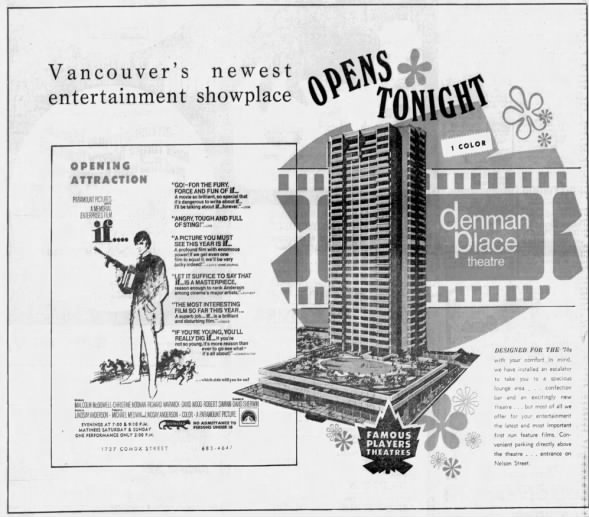