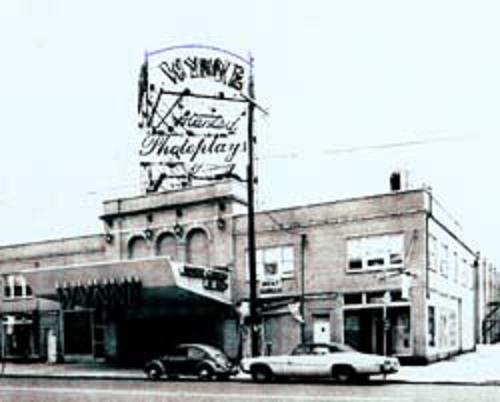 The November 15, 1927 “The Exhibitor” trade publication mentioned that the Stanley Company of America would open a theatre in the Wynnefield neighborhood, with 2,000 seats, all on one floor of the auditorium. Philadelphia architects Hoffman-Henon Co. would design it.

The Wynne Theatre opened November 18, 1927 with Milton Sills in “The Sea Tiger”. The auditorium had a Kimball 2 manual organ, large crystal chandeliers, and 1,763 seats, all on one floor. Second run movies were shown until the 1950’s, when double features were shown. The theatre was operated by Stanley-Warner. The Wynne Theatre closed in 1955.

The theatre was then converted into a catering facility with several ballrooms fit into the various heights of the auditorium. By the 1970’s the theatre featured bingo. In 1981, the Wynne Theatre was sold to Wynnefield civic leader Katie B. Jackson. She reopened it as a banquet and catering facility. It continued as a successful enterprise until after Mrs. Jackson’s death in 1993.

The Wynne Theatre is a two-story high brick building, the color of sand. Large Wynne letters are still on its marquee in 2007, and the usual Stanley-Warner 20 feet high “V” shaped roof sign still says “Wynne”. In March 2016 the Wynne Theatre was demolished. The façade will be mimicked in a new apartment building for seniors, and the rooftop sign, the last on a movie theatre in Philadelphia, will be rebuilt.

The Wynne Plaza Ballroom: The Wynne or Wynne Plaza Ballroom at 54th and Arlington streets was an integral part of the 54th street business sector. It was a movie theater, then became an up-scale catering and banquet hall, and later a bingo parlor. In 1981 the Wynne was sold again to successful Wynnefield entrepreneur Mrs. Katie B. Jackson, who reopened it as a successful banquet and catering facility. It continued as a successful enterprise until after Mrs. Jackson’s death in 1993.

Here is a photo circa 1920s from the Irvin Glazer theater collection:
http://tinyurl.com/yfaw3l4

Demolition reported to be imminent as the building is said to be too far gone to save. Hidden City Philadelphia story here. The piece says that the city took over ownership of the property this summer after the previous owners ran up $500,000 in unpaid taxes.

Currently being renovated to open as Wynne Senior Housing.

The Wynne Theatre opened November 18, 1927 with Morton Sills in “The Sea Tiger.” The Wynne closed permanently March 1, 1953 with Olivia DeHavilland in “My Cousin Rachel.”