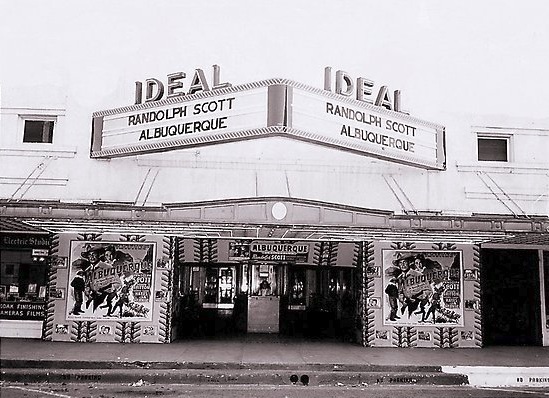 I occasionally went to The Ideal in the late 1950s and early 1960s. It was an old off street theatre that had long since past its days of glory. The auditorium was in the center of the block with access through a long covered walkway from the sidewalk. Either side was lined with poster display windows. The lobby was shabby, dirty and virtually empty of any furniture except for an old table at the entrance where an elderly man sat and collected your money as you entered. There was no snack bar. The man behind the table had a few boxes of candy bars for sale if you wanted something to eat. There was a machine that dispensed coke in a cup with some ice. The auditorium was always dark so it was hard to tell what it even looked like. It had a pronounced echo during the film. There was rarely any heat and the place had that musky smell that comes from old age.
There were rarely many people in the theatre. One exception was when it played the then controversial “La Dolce Vita” in 1961. My mother refused to let me go see it so my father, who was pretty cool, drove me downtown and let me go after making me swear not to tell my mother.
I also went to see a film called “Noah’s Ark”. It was advertised as this big budget production. Turned out it was an old silent that had been rereleased with some sound effects and prerecorded music. I think that was the first silent I ever saw. Even though it was old I was still impressed with the flood sequence.

The theatre was demolished sometime back. The last time I was in Corsicana an empty lot sat where the theatre once was.

The theater boasted an orchestration as big as any church organ in town, and it also had a player piano equivalent to a ten-piece orchestra. John Remonte rigged an electric clock to operate a synchronized arrow outside the theater to indicate the point to which the program had progressed. Louis Levy was also one of the theater’s projectionists.

In July 1917, Levine hired architect M. T. Horn and J. E. Metcalf, contractor, to remodel the theater and add a roof garden at a cost of something over $29,000.

It was at this point, the beginning of a new era, that Lancaster chose to end his story. The Ideal Theater, now under condemnation, was the scene in his boyhood of many happy hours watching the adventures of Johnny Mack Brown and Randolph Scott.

A link to the complete article is at

Philbert, you brought back memories of “Noah’s Ark” for me. We played it on a double feature back in about 1956 along with a little British comedy with Donald Sindon and Diana Dors called “An Alligator Named Daisy”. The only memorable thing about “Ark” was the flood scenes. The Diana Dors comedy made up for “Ark” and we had a fairly good run due to “Daisy”. We normally never played double features, that was one of about only three double features that I can recall. Could never understand why our booker stuck “Ark” on us. It was orginally scheduled as a single attraction for those three days. “Daisy” was added only two days before the scheduled run. Guess someone had second thoughts. I remember we ran “La Dolce Vita” for a week to fair business. We always pulled a picture early if it did not do good. We actually got sued for doing that with “Spartacus” in 1960, and wound up putting it at our second run house for a two weeks to settle with the distributor and brought it back two months later at that second run house on a double feature for three days.

The rebuilt Ideal Theatre opened on January 7, 1918, as reported in the following day’s issue of the Corsicana Semi-Weekly Light. The opening attraction was the musical comedy Have a Heart, with book and lyrics by Guy Bolton and P. G. Wodehouse and music by Jerome Kern.

The expanded theater featured three levels of seating, with both a balcony and a gallery. Dressing rooms for performers were under the stage. The organ console was located in the orchestra pit, along with a piano.

The article doesn’t mention the make of the organ, but in 1924 it was replaced by a two-manual, nine-rank Reuter organ, opus 134.

Cozy Theatre owner Will L. Levine announced the new-build Fifth Avenue Ideal Theatre project in October of 1912 launching on Feb. 13, 1913. The theater had 500 seats more than doubling the Cozy’s capacity. It was an immediate success. The “Fifth Avenue” was dropped in 1915 making it, simply, the Ideal Theatre.

The theatre was expanded and remodeled in 1917 to the plans of architect M.T. Horn. Levine conducted his summer programming at the Ideal Airdome constructed at 311 W. 6th Street to show movies from July 12, 1917 to October 27, 1917. That appears to be the only year of operation for the Ideal Airdome. The hardtop Ideal was closed for two months relaunching with seating extended to 1,000 seats and a Grand Re-Opening on January 3, 1918 as the Ideal Theatre and Roof Garden (Feature House appears to have been dropped). The rationale

Levine that decided to refresh the theatre in 1927 - on a new 30-year lease - with a Grand re-re-opening of the Ideal as the New Ideal Theatre and Roof Garden at its July 24, 1927 relaunch with “Cradle Snatchers.” On September 6, 1928, Levine installed Kuegraph sound system to keep the theatre viable playing “The Vanishing American.” The Roof Garden was dropped from the theatre’s name following the 1929 season.

Publix Theatres Circuit took on the venue and gives it a new look at a Grand re- re- re-opening as the Ideal Theatre on March 25, 1930 with talking pictures beginning with “Hot for Paris.” On September 14, 1930, the circuit replaced the sound system with a more contemporary sound-on-film, Western Electric system. Publix then closed the venue briefly over a rent dispute bringing it back on weekend-only operation. In 1933, the roof garden hosted live sporting events and that appears to be the final year of usage for the roof garden (which, as mentioned, had been dropped from the theater’s moniker four years earlier).

Interstate took on the operation giving the Ideal an streamline moderne makeover and a grand re- re- re- re-opening on August 3, 1940 as the New Ideal Theatre. During the Interstate / Texas Consolidated divestitures caused by the Paramount decree, the Ideal was sold to the two-year old upstart, Trans-Texas Theatre Circuit on February 26, 1954.

Trans-Texas dropped the Ideal at the end of the 30-year lease. Sidney Miller took the Ideal back to independent operation in 1957 along with his operation of the Hillside Drive-In. Miller would then merge with B.L. Hagle of the Navarro Drive-In in 1961. They closed the Ideal of repairs on November 1961. The venue had a relaunch at a Grand Re- re- re- re- re-opening as the Capri Theatre / Capri Art Theatre with a November 30, 1961 showing of “Erotica.” In 1963, Capri reduced to just four days a week operation.

In 1964, the operators toyed with the name calling it “The Ideal Family Theatre - The Capri” dropping the art films altogether. On June 24, 1964, the “Capri” was completely dropped with the theater becoming the Ideal Theatre under new operators George Gunter and John Kearn at its final Grand Re- re- re- re- re- re-opening with free cookies for the kids. The Ideal’s time had long passed, however, as the owners dropped to twice a week operation before closing up quietly on September 13, 1964. One final live music event played there but it was over the Ideal / New Ideal / Capri

The Ideal was vacant for a very long period and was condemned by the city on May 28, 1971. The condemnation was challenged and the Levine family tried to sell the former Ideal and a neighboring building for $15,000 in 1972. Apparently without offers, the venue was offered free to the City of Corsicana as a city auditorium. That was deemed too expensive and the long-vacant building was finally razed.