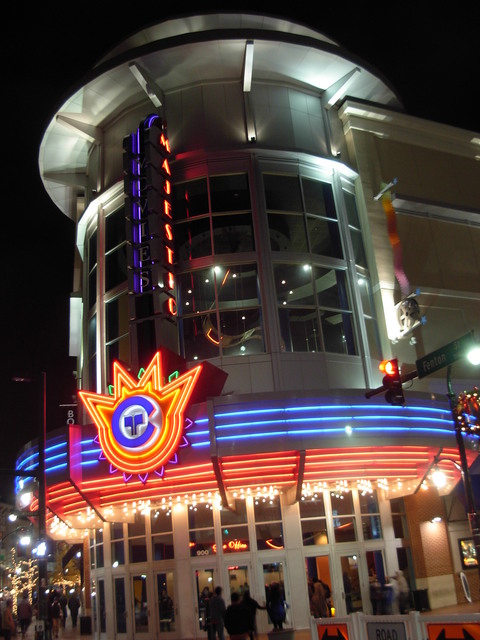 The Majestic 20 is in downtown Silver Spring at the corner of Ellsworth Drive and Fenton Street. It is one block away from the historic AFI Silver Theatre (which shows arthouse & classic films), and near the Silver Spring stop of the Metro’s Red Line.

The Majestic 20 opened in 2004, eagerly sought out by Montgomery County as part of the revitalization of downtown Silver Spring. The movie theater is part of an outdoor shopping promenade with many eating choices. The theater was operated by Consolidated Theatres, and in 2010 is operated by Regal.

I revisited #1 after 7 years seeing the very entertaining movie Super 8. The movie was most likely shown in 4K DP. The movie was decently bright and in scope as I noticed the riser going down after the movie. Surprisingly, the movie had very good use of the surrounds this time and was not muddled from my memories of seeing the Day After Tomorrow, or whatever it was called, back in ‘04. If only the bass was deeper for the film’s tense moments involving the usual fx laden crashes and alien activity. I would have preferred to see it in IMAX-lite but my dumb friend decided to wait for ME to pay. Its ok…next week, he’s going to pay for Green Lantern in IMAX-lite 3D at the $18.00 per ticket price!!

BTW, I missed seeing Pirates in ETX at Tysons. That weekend they booked, of all films, Hangover 2 in the ETX auditorium. Who cares to hear that movie in a theater with 40K watts of sound?

Like many of the multiplexes built by the Consolidated Theatres chain, the Majestic 20 was designed by the Charlotte, NC, architectural firm ADW Architects.

I saw Mission Impossible 4 in IMAX over the holidays. No complaints, everything was as it should be. The large screen canvas properly showcased some of the more harrowing scenes like Tom Cruise’s hop around the skyscraper hotel. Didn’t see the preview for The Hobbit though.

I saw ‘Skyfall,’ the latest James Bond flick last night. Presentation was very good, though the IMAX intro started with audio only. Previews of ‘The Hobbit’ and ‘Oz’ look very good, especially ‘Oz.’ Adele’s voice can be heard center screen. I prefer vocals to be surround especially with top notch visuals that usually open the Bond movies. I want to see the movie in a THX cert house to compare sound track subtleties. While IMAX is loud, its not necessarily crisp, with distinction.

The movie is a good Bond flick, with the usual intrigue, femme fatale, but with less gadgetry, even though there are new alphabet characters introduced. I wished there was more story/scenes with Javier Bardem and ’M.‘ There were some audience sobbing at the end when a certain character passes.

On the refreshment side, this Regal has upgraded concessions to include burgers, fries and onion rings albeit at the inflated movie chain price. If you forgo the drinks, the $5-$7 prices for a burger and fries is a little more palatable…$1 more for onion rings. They did mix up my order giving me fries instead of onion rings. The fries were okay, crisp, hot and plentiful. The boneless wings were ok, if plain.

My friend and I saw ‘Star Trek: Into Darkness’ here at a fan ‘sneak’ in IMAX-lite 3D. Surprisingly, the line was loooong, the longest I’ve experienced at an opening film day IMAX-lite showing. There were a few dressed in Starfleet uniforms, which got the attention of some special folk, not sure if they were from Paramount or a news organization, who took pictures. They gave out posters to a few hundred of us, which was a nice bonus.

No friendly greeting from the ticket taker.

The movie is quite good. I want to see it a few more times in the different formats. I have some quibbles with the ‘Wrath of Khan’ references and scene homages. I hate the pixie dust warp drive trail. Bad idea. Presentation was very good but sound booms weren’t as they should have been such as during some explosions and warp jump snaps. Not sure if it may have been the soundtrack, as the trailer for the upcoming Superman reboot ‘Man of Steel’ had some good sound booms from just the music, itself.

as part of Regal’s nationwide upgrading it’s projector’s to High Frame Rate films (i.e, specifically ‘The Hobbit: The Desolation of Smaug’) auditorium 15 can playback features as such.

so I finally caught a movie on the IMAX-D screen: ‘Stalingrad’ in 3D. Still miffed that for the first screening of the day, there is no matinee pricing for the IMAX screenings: $19 … “ouch!” Sound was colossal , and the image was great … but. The screen is no where as tall as either the IMAX-D or ETX screen over at Tysons. Even the ‘Xtreme’ screens over at Cinemark Fairfax Corner have a considerable height advantage.

does anyone know what the dimensions of the IMAX-D screen IS?

Since I missed the last showing of 2001 at the AFI Silver, I walked here to see what was playing and decided to see Ant Man in IMAX. I think its the first time I’ve been back to a Regal theater since the Into Darkness film blogged above. 5 years! And after tonight’s visit, it may be another 5 before I go back. :)

The remodel of the IMAX auditorium is nice. The soft faux leather seats are car seat comfortable and firm. They don’t recline! Seating capacity states 303.

I can’t believe I plunked down $20 for this movie. I used the kiosk to buy as the single cashier was busy. Still having my Regal card, I saw I had 500 points. The movie point system with them has changed in what I believe is just psychological. Instead of singular points for your dollar spending, it is now in the HUNDREDS.

The main concession stand is undergoing a major remodel and was completely closed. The secondary refreshment counter was opened and the counter guy explained you need 7000 points for a measly popcorn. I bought a pan pizza for about $7, not too bad. I asked for ice water and received nothing at the other end. Customer service is poor.

The pre show show plays on the entire screen, which is very nice. On the other hand, the sound plays only on the left side. Why this is, is baffling. You’d expect more for that $20 ticket price.

The IMAX trailer is the same. The circular countdown touting the big screen and immersive sound. They need to update it. Of all the trailers shown, the bio pic of Queen’s Freddie Mercury in the upcoming ‘Bohemian Rhapsody’ looks quite good. :)

Presentation of the movie was as expected. This is IMAX-lite. Some decent stereo rear effects but nothing worth mentioning. Paul Rudd looks better with age. The CGI de-aging of Michael Douglas and Michele Pfeiffer’s characters are almost flawless. The darkness of the short scene definitely hides some of the imperfections of the effect but the shots are short that you’ll have to freeze frame the eventual home digital copy to notice it better.