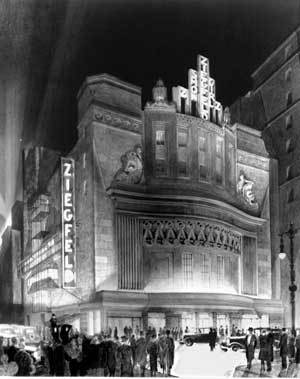 Long before the 1969 opening of the current Ziegfeld Theatre single-screen movie theatre (closed January 2016), there was an earlier Ziegfeld Theatre, an Art Deco masterpiece designed for legit theatre use. The original Ziegfeld Theatre opened February 2, 1927 with 1,628 seats and Florenz Ziegfeld’s production of “Rio Rita” The theatre was designed by Ziegfeld’s favorite designer, Joseph Urban, with architect Thomas W. Lamb serving as consultant. The theatre’s construction was financed by William Randolph Hearst.

“Show Boat”, one of the greatest of all American stage musicals, debuted on December 27, 1927 at the Ziegfeld Theatre.

During the Great Depression, the theatre became a second-run movie house. Loew’s Ziegfeld Theatre opened on April 21, 1933, with advertising that ‘The Home of the 'Follies’ Becomes Manhattan’s Glorified Home of Talking Pictures'. At noon that day, 200 alumnae of Ziegfeld shows took part in a tribute to Ziegfeld, who died the previous year. The last movies at the Ziegfield Theatre were “Once Upon A Time” and “Shadows In the Night” in August 1944.

In 1944 Billy Rose bought the Ziegfeld Theatre and returned it to legitimate stage use with Cole Porter’s “Seven Lively Arts”. “Gentlemen Prefer Blonds” and “Kismet” were among the hit shows to open at the theatre when it was owned by Rose.

Refitted by NBC in 1955 as a Television studio for color television, Perry Como’s Saturday night variety program originated here among several other programs. The theatre was renovated in 1959.

Converted back to legit use in 1963 for “An Evening With Maurice Chevalier”, this show was followed by Bert Lahr in the musical “Foxy” and then a special appearance by Jack Benny, followed by a personal appearance by Danny Kaye which were among the last attractions before the flop musical, “Anya”, directed by George Abbott, closed the theatre in 1965. Despite public outcry, the Ziegfeld Theatre was demolished in 1966 to make way for an office complex.

A few hundred feet west on W. 54th Street, a new single-screen movie house, which bore the famous ‘Ziegfeld’ name, opened in 1969. This theatre, which was once the premiere Walter Reade house and, later Cineplex Odeon house, became part of the Clearview Cinemas circuit and then Bow-Tie Cinemas before closing in January 2016.

The newer Ziegfeld Theatre (which has its own separate entry on this site) had memorabilia displayed with pictures of the old theatre and the “Ziegfeld Follies”.

Wasn’t 1933 the year a lot of the 42nd Street playhouses — including Ziegfeld’s Follies' home the New Amsterdam — converted to first-and-second run grindhouses?

Not necessarily 1933, Mike, but throughout the early thirties as the live shows closed, the cheaper movie options were more attractive to audiences as well as less risky to put on.

My father told me that it was difficult to demolish The Ziegfeld theater due to its solid construction. I don’t recall exactly what he said made it so difficult but it had to do with some kind of reinforced concrete (something more elaborate than the steel reinforcement that was/is used). My father worked for Burlington Industries in the 1960s and I believe the construction of its headquarters building was one of the reasons for the old Ziegfeld being demolished so it would make sense that he would know about this.

The original Ziegfeld can be seen in “Sweet Smell Of Success” in a lenghty scene with Burt Lancaster, Tony Curtis (who enters from the stage door), and Martin Milner (Adam-12) who comes in through the front door, lobby features seen as well as carpeting (great shots) and the auditorium showimg orchestra, balcony with three exit doors at different levels and a sidewall decorative grill. The stage was being used for a TV taping of a columnists' report Burt’s “J.J.” character. The scene lasts 15 minutes so you can’t miss it. I don’t know if this has been posted before.

The Ziegfeld Theatre was one of the premier theaters of its day. I have very fond memories of working there, and also seeing films there. The last being, The Wall, Pink Floyd. What a film!

Not at this house

Marcy Starnes, below is the Zeigfeld Theatre you worked and saw those films at. It was located at 141 W. 54th Street and opened in 1969.

DavidZornig, thank you for taking the time to post the link.