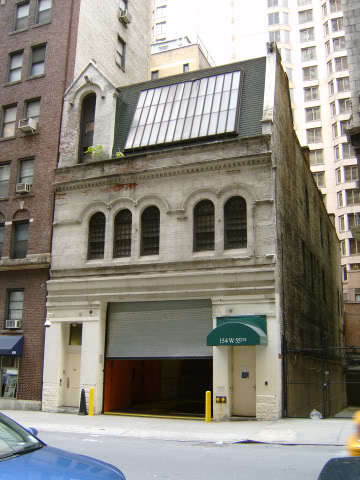 Previously a horse stable, this opened as the 299-seat 55th Street Cinema on May 20, 1927. This was a tiny cinema of some reputation that for decades showed first run art house features and special programs.

On 20th December 1968 Andy Warhol’s “Lonesome Cowboys” starring Joe Dallesandro had its New York Premiere and played at the 55th Street Playhouse from May 5, 1969. It paved the way for the rest of its life as a X-Rated adult movie theatre, soon to be presenting gay adult movies.

I lived in NYC from 75-83 and it was the marquee then Garycom.

Thanks hdtv27. I’m aware of the Canby review. It’s dated 6 May 1969, the day after Lonesome Cowboys opened.

I’ve done a bit of research. An ad for Lonesome Cowboys at the 55th St. Playhouse that appears in the 31 July 1969 Village Voice announces the return of Flesh – opening Monday.

The previous week’s ad, 24 July, only listed Lonesome Cowboys at the 55th Street Playhouse (with Blue Movie at the New Andy Warhol Garrick)

So the beginning of the double bill was between 4-11 September, probably the 8th as the films at 55th Street usually changed on a Monday.

In regard to when the double bill finished, on 16 October 1969 an ad appears saying that the two films are finishing on Sunday at 55th Street. Then On 30 October an ad appears advertising Flesh at “Trump Village” – a venue I’m not familiar with.

So, it would appear that the double bill opened at the 55th Street Playhouse between 4-11 September (probably Monday, 8 September) and closed Sunday 19 October, 1969.

The theatre was originally known as the 55th Street Cinema and opened on May 20th, 1927, under the management of a new company called Art Cinema League. The building had previously served as a horse stable, with the façade preserved for its architectural importance. The gutted interior became a 299-seat auditorium in Spanish mission style.

The pioneer art cinema was a contemporary of the Roxy Theatre, which had opened in March of that same year.

This is the theater that debuted Viktor Und Viktoria, the German language original that was remade into First A Girl and much later, Victor/Victoria. It debuted there in January of 1935.

It was not really overnight. If you look at the transition of European cinema from the fifties to cheap American exploitation films sold as ‘art house’ during the same period, the two markets became very mixed. Skin flicks have always been around. They just got more graphic after the courts labeled films as protected free speech. “WAYS OF LOVE: THE MIRACLE”(1950) and “I AM CURIOUS (YELLOW)” (1969) were two landmark cases. The X rating backfired when it became a selling point, further muddying the market between ‘art house’ and ‘sexploitation’.