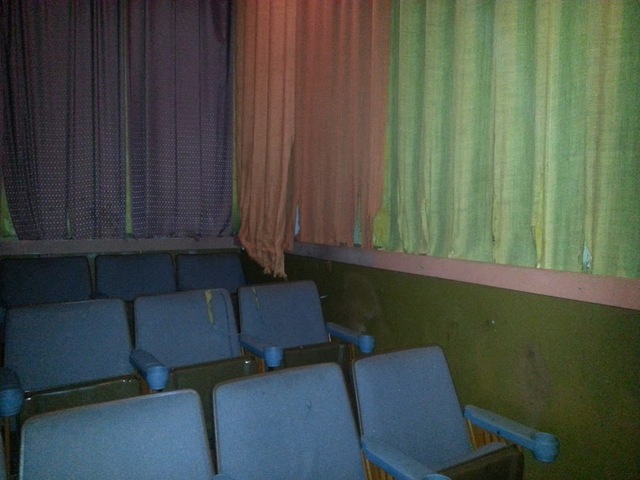 A six-plex in the center of a mall. Six auditoriums in a row with the largest two at each end and the smallest ones on either side of central concession stand. As of summer 2006, this was a discount house showing six month-old movies.

The AMC NORTHOAKS 6 was the first movie theatre I ever worked at. I was Assistant Manager there in 1979 under the manager that trained me – Mario Marques. When i started in the business, Heaven can Wait was finishing its run and we played The Main Event, Woody Allen’s Manhattan, and Phantasm. The biggest movie while I was there (or just afterwards) was Raiders of the Lost Ark. As a new Asst Manager I would often lock myself out of the Managers' office and I would get back in by going through the ceiling tiles. I would land inside just as the head Usher prid open the Mgr office door with a credit card, and thus i earnerd the name “Superman.” I would also run lines on weekend evenings using a megaphone. since i was right behind the island box office, it bothered the cashiers like JanetT, who was really very sweet, but would always fiddle with the switch on the megaphone to embarass me. When i got promoted to another theatre, the staff gave me a plastic baby rattle of (Managers' office) keys, and a plastic megaphone with AMC emblazoned on it,souvenirs which i have unto this day. Some memories i have of the theatre are: Mario taught me how to high-speed roll quarters collected from game machines; one lady put her four-year-old under a blanket posing as an “infant” (1- and 2-yr olds get in free) went right to the ladies room and both came walking out. [in retrospect, two big feet made a fishy lump under that blanket.] As a newbie, i got in troulble when somebody walked out with the standee of Steve Martin in “The Jerk” with an arrow going through his head, because i had placed the lobby standee near theatre 1 which was too close to the theatre and mall exit. Across the way was the AMC CHAMPIONSVILLAGE 2, where aI subbed one day for i think “Apocalypse Now”. But after less than a year I was made Manager of the AMC Kingwood 2, where i stayed for 3 ½ more years.

Brian, this is William. I worked with you at the Gramercy for several years. I enjoyed reading your comments about your time there and would like to get in touch with you to find out how you’re doing and reminisce about the good old days. Feel free to contact me at my email address (which I believe should be visible to you.) Talk to you soon, I hope. – Bill

Bill, it’s great to see you on this site. I was surprised to find your message to me here on the North Oaks 6 (I guess it’s where I last posted) rather than on the Gramercy. No, your e-mail addreess is not visible in your profile. I suggest you list your “favorite” theatres, starting with the Gramercy. Little by little I’ve been filling in reminisces about various theatres I had something to do with. I even remarked about the clanking radiator at 72nd St. East.
It’s a shame this site (CinemaTreasures.org ) isn’t more widely known yet. I’ve been lurking on Facebook vicariously wondering what’s been happening with my former employees both in New York City and Texas. But I’ve only been able to find a very few. I certainly would enjoy re-connecting with any of them who care to talk. THAT INCLUDES ALL MY FRIENDS WHO REMEMBER AMC’s KINGWOOD 2 and the NORTH OAKS 6. On aol, my screenname is BriForman.

I live within walking distance of this theater…amazingly enough, it is still operating (as the North Oaks Dollar Cinema) and does a brisk business.

I used to go to this theater when I was a kid. My mom would take my sister and I quite often during the summer when this first became a $1 movie theater. I remember seeing movies such as Richie Rich, The Sandlot and The Mighty Ducks here. The area around it has gone downhill since then. I still live in the Houston area and pass this theater from time to time but I doubt I’d ever go back. I do think about going just for the nostalgia.

Does anyone remember the $1 movie that used to be in the Greenspoint area, on the opposite side of I45 as the mall?

Was it the AMC Greens Crossing 6?

Hey Scott! Yes it was! I used to work in the area and Id pass by that theater every now and then. It would always bring back memories. I believe its some sort of church now.

It looks a little run down in the photo with ragged curtains. Good it is still open though. All movie theatres should always have a long life.