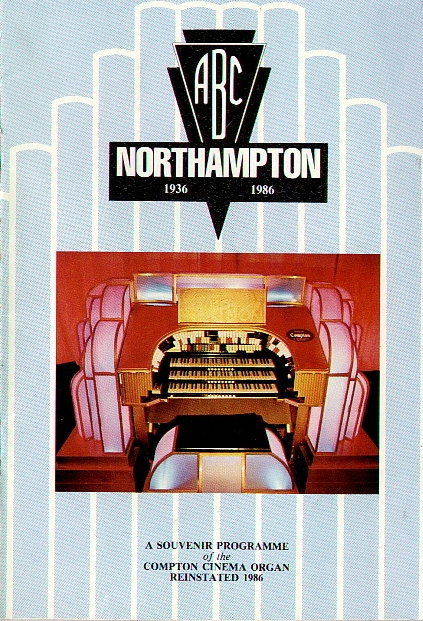 The Savoy Cinema was built for and was operated by Associated British Cinemas(ABC) and they employed their in-house architect William R. Glen to design this super cinema. The wonderful interior decorations were carried out by designers Clark & Fenn.

The Savoy Cinema opened on 4th May 1936 with Jack Benny in "Broadway Melody of 1936" and "Ice Flow". The cinema has a prominent town centre position on Abingdon Square. Seating in the auditorium was provided for 1,954. with 1,258-seats in the stalls and 696-seats in the circle. Lighting was all concealed in troughs, and the auditorium was decorated with rich plasterwork and grilles by the proscenium which held the pipes of the Compton 3Manual/7Ranks theatre organ which had a Melotone unit and an illuminated surround. It had been transferred here from the Princess Cinema, Dagenham, Essex and was opened by Wilfred Southworth. The Savoy Cinema had a resident organist through to 1956, the last being Harold Nash.

The Compton organ was removed from the building in 1960, as space was required to house the pop shows that were being staged in cinemas around the country. The organ chambers were converted into extra dressing rooms. It was re-named ABC in 1961. In December 1974 it was tripled with two screen seating 263 and 208 being created under the circle in the rear stalls. The main screen had 1,018 seats located in the former circle and the front stalls.

Surprisingly, another Compton organ was installed in the ABC in 1985-1986. It was similar to the original one that had been removed and this organ came from the ABC Ritz Cleethorpes. It was opened by organists Ronald Curtis and Michael Wooldrige on 4th May 1986.

Later in 1986, the ABC was taken over by the Cannon Group and re-named Cannon. The Cannon was closed on 27th April 1995, a few weeks after a new multiplex cinema opened in the town. The closing films were;“Pulp Fiction”, “Terminal Velocity” and “Just Cause”. The Compton organ was still in the building in 1993, but I don’t know what became of it.

It lay empty for several years and plans were proposed to convert it into a nightclub, but these were turned down, mainly due to the fact that the plans involved the removal of the circle. This was not possible as the building had been designated a Grade II Listed building in October 2004, just six months before closure.

In around 2000, the building was purchased by the Jesus Army for use as a church, but they came up with several difficulties, firstly there was some major structural repairs to be done, and then their proposals for church use were to remove much of the interior of the building and create stairs down from the circle into the stalls. These plans were refused and the case was sent to a Public Enquiry. Support for changes to the proposed plans came from English Heritage and the Cinema Theatre Association. The Public Enquiry lasted several weeks and came to conclusion to allow some amendments, but keeping the interior very much looking like it did originally.

The building became the Jesus Centre, but since 2005 it is also known as The Deco. With seating provided for 900 it is hired out for conferences, special events, live performances etc. when not in church use. In May 2019, 6 men from the Jesus Army Church (aka Jesus Fellowship Church) were sentenced for indecent and sexual assaults on 11 victims between the 1970’s and 1990’s and over 200 other complaints. The church has closed the building due to a loss in congregation numbers.

By September 2019 it had re-opened as a live theatre named Deco Theatre. In October 2019 it was re-named Old Savoy Theatre, bur soon reverted back to the Deco Theatre name. Closed by the Covid-19 Pandemic in March 2020, it was decided in July 2020 that until live venues were allowed to open in would re-open as a cinema, screening classic films.

Two interior photographs from September 2005:
View from circle
http://flickr.com/photos/nugatory/41974250/
A view from the stage. This shows the front extension to the circle (and the pillars which support it) and the rear of the two mini-cinemas which were created under the circle in 1974. There are two staircases on each side, which must lead lead to the front circle extension.
http://flickr.com/photos/nugatory/301246259/

The organ was only on loan and was removed by its owner before the theatre closed. It is now in store. The original Compton was removed by Alfred Davies &Co, a local organ builder. Some parts were re-used but it is thought the majority of the instrument was scrapped.

A series of interior photographs, taken in February 2009, here:–

Open again as the Deco Theatre, with live shows only. Photos from September 2019:–

Now renamed as The Old Savoy