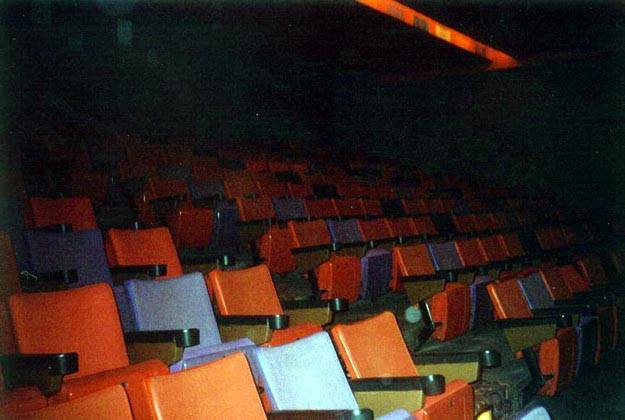 The theatre was split into 4 screens in 1979. Once part of the Odeon circuit, it was taken over by Cineplex Odeon in 1984. The Garrick Cinemas closed in 2002.

It became a live-entertainment venue known as the Garrick Centre. It was closed in March 2020 due to the Covid-19 pandemic.

thanks much for that news. could you please provide the exact website address? i haven’t been able to access it. thanks-g.

thanks a lot sam. i was able to google it, thanks to you. it’s nice to see that the garrick is being used for entertainment, like the old days, when i used to see movies there. guess there’s more entertainment coming to the garrick? i imagine they’re still using the place as a conferenc center as well?-garro

Here is an October 1987 ad from the Winnipeg Free Press:
http://tinyurl.com/y93jca8

If anyone has any interior shots from over the years, please contact me. I’m trying to archive as much as I can about it.

Any photos in particular of the twin auditoriums or the round concession stand closer to #1 would be great!

Has PT created a booklet on Wicks organ ?

Whatever is left of the former Garrick Cinemas is now called the Garrick Centre. It is a three-venue live performance facility. Click on the “Venues” link on the left side of their page to see photos of the three auditoriums, with links to seating charts. Venues 1 and 2 each feature stadium seating sections, and look as though they might have been carved from the original theater auditorium, but as I never saw the theater I don’t know that they were. It might be a radical reconfiguration within the original building shell.

If the auditorium survives, though, then the house should be listed as open under the name Garrick Centre. Maybe somebody who attended the Garrick Cinemas could check the photos on the Garrick Center web site and see if they look familiar in any way.

This page from the University of Manitoba’s Winnipeg Building Index gives the original construction date of the College Theatre as 1919. If that’s correct, then the 1928 opening event, described by sam_e in the comment of Feb 5, 2005 at 4:53pm, must have been a reopening following major alterations of some sort.

Besides cinema 3 being converted to a swimming pool with a small spiral water slide, the theatre is mostly in tact from when it was a movie house. New front ends were built in all three rooms to accommodate stages for lectures, bands, and other presentations. Cinemas 1 and 2 had balconies at the back and sloped in the front. You accessed both sections from the entrance in the middle, centre of the auditorium. All the original seats are still there, with Cinema 2’s front end seats on the sloped floor removed for general admission concerts.

The original twin Garrick building was built and opened in 1968. According to my records, it was built from the same steel frame as the original single-screen Garrick that opened in 1928. That original Garrick had a similar layout.

This seems to have closed in 2020 due to the pandemic.