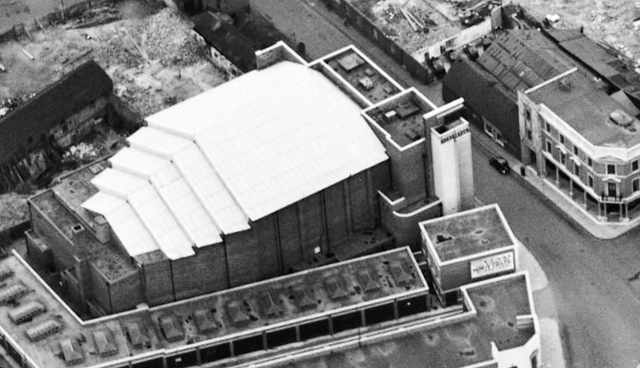 The Odeon Theatre was one of the original Odeon’s built for the Oscar Deutsch, Odeon Theatres Ltd chain. The Odeon opened on 11th September 1937 with Conrad Veidt in "Dark Journey". Externally it dominates the street, with its cream faiance tiling on the entrance block and around the large window which allowed light into the foyer. There is a slab tower over the entrance, which is covered in black tiles.

Inside the auditorium, seating is arranged in stalls and circle with 1,272 seats in the stalls and 668 in the circle. A series of stepped troughs with decorative edges, held the concealed lighting to illuminate the space.

In October 1973 the Odeon was tripled with 622 seats in the fomer balcony and two mini screens in the rear stalls under the balcony which seated 96 and 111. The Odeon was closed on 4th June 1983 with "The Boys in Blue", "Table For Five" and "Nutcracker". It was converted into a Top Rank Bingo Club with the cinema tripling removed to create one auditorium again.

In recent years it was a Mecca Bingo Club, but this was closed in March 2007, a victim in anticipation of the Government’s new law which bans smoking in public places from 1st July 2007. The building was put up ‘For Sale’.

In October 2009, it had been refurbished and re-opened as the Diamond Banqueting Suite. This was closed in March 2020 due to the Covid-19 pandemic. In April 2021 police raided the vacant building to discover an illegal cannabis farm operating in the building. Four men were arrested.

In October 2000, the former Odeon was designated a Grade II Listed building by English Heritage.

Full frontal here for you Ken! http//www.blackcountryhistory.org You can’t get a direct link on here since in the search box you have to surround the name of the subject in “inverted commas” when you get on there(They don’t tell you that on the site which leaves hundreds of punters lost completely) Don’t be too ambitious and type in Odeon,Wolverhampton. Just put in “Odeon” and you’ll get there. Click on View Record and not the photo until you get the View Image instruction but then don’t click on the instruction but the image itself. Are you all still with me?

The Black Country of the West Midlands is my home area(see previous comment) Click on Images also to get the correct database or
otherwise all you might get is Public Works entries from Victorian Times of when they emptied the dustbins.Believe me! We’re all Martians here!! LOL

Thanks smoothie. I found the image. Excellent find! http://www.blackcountryhistory.org/

Ian(or anyone else for that matter)would you like to furnish me with your direct e-mail details through the CT message system? I can send you photographs of the Odeon Wolverhampton in particular which should be on that site but have got snarled up in a legal wrangle regarding funding between the local archive service and their website designers, and others which i have permission to photocopy but for copyright reasons can’t as yet be published universally.

No prob, I look forward to them.

Ian-the Local history website has now got itself sorted. www.blackcountryhistory.org.uk Type in just “Odeon” in the searchbox, and click on ‘images’(its pre-set on archive papers otherwise). Don’t foget to include the “inverted commas”.

The Maltby Collection on English Heritage has also been enlarged too.

I’ll still mail one or two “specials” over thwe weekend when i can (a)get my hands on them (b)Persude\my boss that 100 hrs a week isn’t all that nice really. LOL

Enthusiasts of rescued cinemas (Odeons in particular) might like to know that this past week has seen the re-opening of our 1930’s buidling as an Asian banqueting and conference centre. Maybe Ken Roe can advise us what was the conditionality of the listing for this place, in which case I will zip along there and see if i can get hold of a brochure for people to scrutinise.

As we speak, the flyer to the facility has just been published on-line, and a glimpse of the renovations can be seen here:-
www.touchwolverhampton.com/business/website/value/6606746

Further pictures of the Odeon as the Diamond Banqueting Suite can be seen here. They were taken in October 2009, and the balcony was yet to be restored, but work is due to start on this area shortly. It is looking in splendid condition, and it is good to see a use being found for the Odeon which does not damage the scale and appearance of the building.