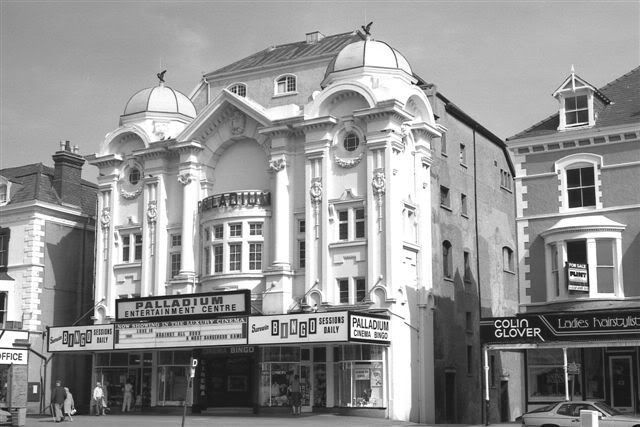 The Palladium Cinema opened on 30th August 1920 (Bank Holiday Monday), and was built on the site of the Market Hall. Intended as a cine-variety theatre, it is a very imposing building, both externally and internally. The predominent style being Georgian.

There is much decoration on the facade which had two side towers, topped by domes and a central recess over the entrance that is flanked by pillars which support a pediment. There is a circular entrance foyer, 25 feet in diameter, with classic columns and a domed ceiling. Inside the auditorium seating was on three levels, stalls, dress circle and balcony. There are four boxes on each side of the stage and a further three boxes were located at the rear of the dress circle. The proscenium is 31 feet wide and the stage is 32 feet deep and 55 feet wide. Backstage facilities included eight dressing rooms. The Palladium also had a cafe for the convenience of its patrons.

During the 1950’s and 1960’s in the summer months, the theatre presented stage productions in repertory and also revues. It was at this time that bingo was introduced on some weekday evenings. It was taken over by the Hutchinson Leisure Group of Burnley and the building was twinned, allowing bingo to operate in the former stalls and a cinema in the former circles seating 336.

Later it was taken over by Apollo Leisure UK Ltd. and they closed the building down on 8th September 1999. The building was sold to the J.D. Wetherspoon chain of pubs and they converted it into one of their theme pubs. Retaining its decorative details and restoring it back to its original single space, the Palladium pub opened on 22nd August 2001.

The Palladium is designated a Grade II Listed building.

I’ve uploaded 3 photos of the interior as it is now, and one of the exterior. At least Wetherspoons have kept to the theme of the building, they’re very good at that, unlike the supermarket lot. Please click on photos.