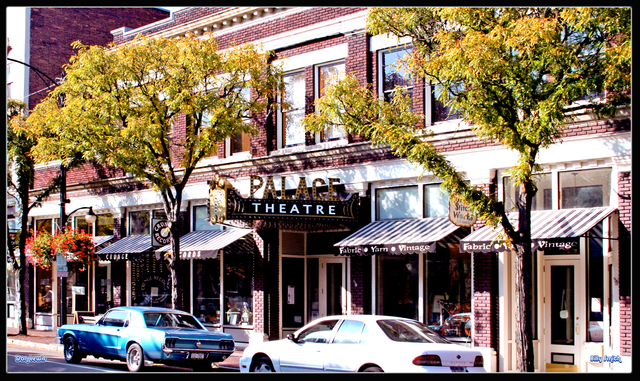 It reopened as the Palace Theatre in 2007.

This Palace opened in 2007. It is different than the old Palace which, although also on West Market Street, was demolished in 1986.

According to the official web site of the Palace Theatre, this twin cinema occupies a space that was was once an upstairs theater called the Little Princess. The web site says that the Little Princess opened in the late 1800s, but to me the building looks more like something from the early 20th century. There’s no Victorian style to the facade, though it is possible that it was a Victorian building that was remodeled with a more modern facade in the 1910s.

The Corning Evening Leader carries many ads for a theater called simply the Princess during the late 1910s and mid 1920s. The Princess is mentioned as a theater as late as 1929, but this is in an item about an amateur theatrical performance being held there. The last ad for movies at the Princess Theatre that I’ve found is from 1927.

Google Maps has no Street View for this location, but they have a decent Bird’s Eye View at Bing Maps. The gabled roof of the upstairs hall the theaters occupy is easily recognizable, especially if you rotate the view to the sides.

I’ve found that the original Palace Theatre was just down the block from this theater, probably at 35 W. Market Street. It advertised in the Evening Leader from as early as 1931 and into the early 1950s.

A 1914 issue of Variety carried a brief announcement that the Princess Theatre in Corning had just opened as a picture house with 800 seats. The manager was Harry P. Kress of Wellsville. I can’t find the date of the publication, but it was probably from around mid-October.

I’ve also found two references in Evening Leader items in 1930 and 1931 to a theater called the Little Palace. This was before the first ads for the Palace Theatre at 35 Market had appeared. I wonder if the name Little Palace has been accidentally mingled with the name Princess, and that’s how the modern Palace’s web site came up with Little Princess as the early name of the theater in their building? It’s even possible that the Princess was the Little Palace for a year or so, and then the name Palace was moved to the other theater down the street.

Here is a picture of the Princess Theatre on Market St. in Corning NY from a July, 1915 article in The American City magazine. https://www.flickr.com/photos/ssave/32882378560/in/dateposted/