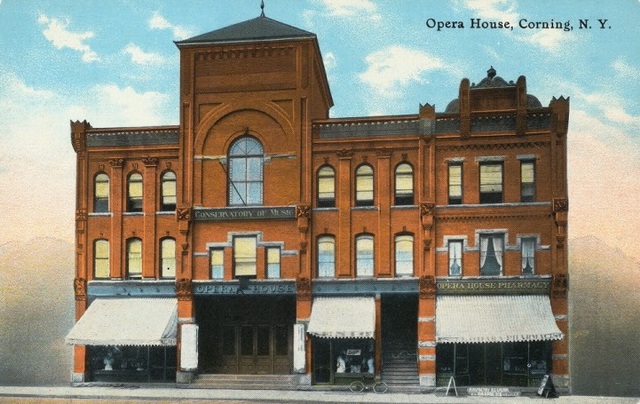 The Opera House was operating in the Fall of 1891. In February 1923 it was renamed State Theatre, and in 1941 had been operated by the Schine Circuit, who had recently closed the theatre. It was still listed as (Closed) in 1943. It had reopened by 1950.

The August 12, 1916, issue of The Moving Picture World had the following item about the Opera House:

“The Corning (N. Y.) opera house recently closed its doors. Just when the house will again be opened is much in doubt. In this connection a late report from Corning says the five-year lease under which the house has been operated expired July 1. Although the house has been kept open since on the old lease. It is understood that the arrangement has not been satisfactory to either party.”

Then the September 30 issue of the same publication has this item about the Opera House:

“Corning, N. Y.—L. E. Harris, proprietor of the Family theater, Albion, and Jack Lee, of that city, have leased the Corning Opera House. The theater has been redecorated throughout and has new opera chairs. The house seats 1,000 and will have an orchestra each evening. Mr. Harris will look after the mechanical end of the theater and Mr. Lee will take care of the executive duties. Road shows, vaudeville and moving pictures will be featured.”

Will: The Princess was one of two houses in Corning that were mentioned in the August 19, 1916, issue of The Moving Picture World (the other was the Bijou.) As the Princess was mentioned between the two articles about the Opera House that were less than two months apart it seems unlikely that they were the same theater.

An ad for architects Leon H. Lempert & Son in the 1900-1901 edition of Julius Cahn’s guide has the Opera House in Corning on a list headed “Some of our theatres.”

Will: According to the website of the Palace Theatre their building was originally opened as the Little Princess Theatre in the late 1800’s.

An item in the February 3, 1923, issue of the Corning Evening Leader said that the former Corning Opera House would reopen as the State Theatre on Monday night, February 5.

The Schine circuit had control of the State by 1926, when the March 13 issue of Moving Picture World said that the company planned a complete remodeling of the house. The $75,000 project was slated to begin on May 1.