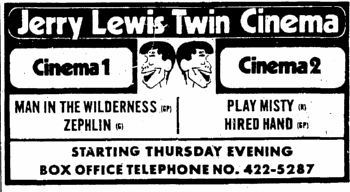 The Jerry Lewis Twin Cinema was opened on January 20 1972 with Sandy Duncan in “Star Spangled Girl” & Lee Marvin in “Paint Your Wagon” in screen 1 and Richard Harris in “Man in the Wilderness” & Clint Eastwood in “Play Misty For Me” in screen 2. On September 20, 1973 it was renamed Fiesta Twin Cinema. It was closed on April 26, 1993 and was demolished in November 1993 when Scripps Hospital expanded.

I know Jerry was shocked when R rated movies were booked in.

I remember all the flicks I saw here! Hangar 18; The Blue Lagoon; Coast to Coast; The Black Hole; Earthbound; and Clash of the Titans.

Farrell’s was next door and in the lobby of Fiesta Twin, they shamelessly had an advertisement saying to come on over after your flick!

I remember going on a date to Farrell’s in December 1989 and seeing the empty lot where the theater once stood.

Mr. and Mrs. Dale Lingg were the latest operators of a Jerry Lewis Theater and the circuit presented a plaque to the at a benefit opening on January 19, 1972 with “Star Spangled Girl” and also “Paint Your Wagon.” The Mayor was there along with Miss Chula Vista. The theatre opened to the public on January 20, 1972 with “Girl” and “Paint” continuing operations on Screen One and “Man on the Wilderness” and Play Misty for Me" on Screen Two. Family fun was also next door in the the retro Farrell’s Ice Cream Parlour and Old-Time Restaurant.

The Linggs found out that movie ownership under the Lewis Circuit was not the one-button automagic fun and profits that were promised. The chain tanked a year later and the Linggs moved on. After the Lewis Chain dissolved, new theatre owner, Bob Ortega, had a naming contest. He announced the winning entry was Showcase Cinema but likely was dissuaded from that name as it was in use elsewhere.

On September 20, 1973, he renamed as the Fiesta Twin Cinema with Screen One as a discount, sub-run dollar house showing “Billy Jack” and house two at “regular;ar prices” with “The Legend of Hell House.” The Fiesta got a new owner, Jerry Willits in 1974 who also began screening foreign films at midnight in early 1992.

The neighboring Farrell’s teamed up in the 1990s for dinner and movie concept long before that trend hit. But Farrell’s was taken over by the Scripps Hospital which forced sold the ice cream shop at the end of 1991 and razed thereafter. They also were the owners of the theater which closed later on April 26, 1993. Willits teamed up with Nickelodeon Cinemas of San Diego moving to a new 10-plex operation launching April 27, 1993. The theatre was razed on November 1-3, 1993.