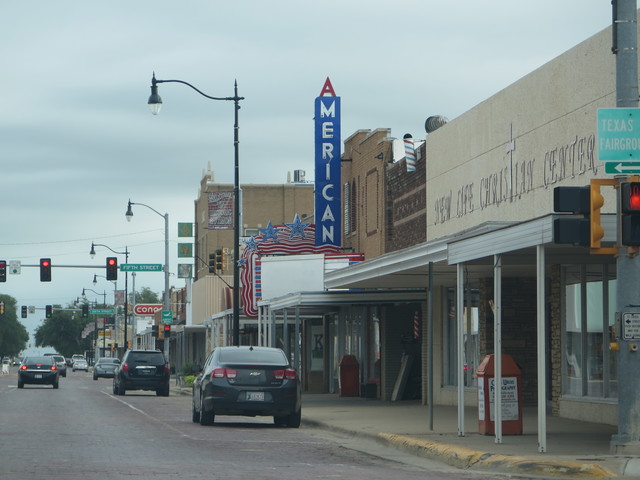 The American Theatre opened January 14, 1928. It is housed in a tan brick building inlaid with brick accents and an arched window behind a most unique vertical sign. "American" was spelled out in white letters and neon on a blue background with the top "A" being red. Flowing out from the bottom of the sign over and down the center of the red, white and blue marquee were blue stars with red, white and blue stripes all accented with flowing neon. It was remodeled in 1947 to the plans of architectural firm Sorey, Hill and Sorey. It was twinned in early-1973 and closed around early-1975.

It became a live theatre around 1980.

A 1999 photo of the American Theater in Guymon.

A close up look at the American Theater sign and marquee.

What a great marquee and vertical.Thanks for the photos.

The American theatre grand opening was a Sat. night on Jan. 14, 1928. Opening prices were 25 and 50 cents. The American was across the street and south one block of the Royal Theatre of Guymon. The Royal started as the Dime Theatre with silent film.

The American Theatre is now the Guymon Community Theatre, owned by a few locals who went in on a dream together for community plays around 1980. The founding members have since passed or moved on to other passions but a board still manages the theatre, all volunteer. An effort is underway to restore the marquee. They have plays or musicals here each quarter, and recently purchased a projector and screen to start showing movies in between productions. A few fundraisers have already been held, and more are in the planning stages. It is a huge undertaking at $90,000-$100,000 and they are currently at about $15,000. The original company that made the sign is from Oklahoma City and they are still in business today. It is a historic preservation project. The box office can be reached at 580-338-0019.

Guymon does have another movie theatre not listed on this site (In addition to this and the Corral Drive In) which is Northridge Cinemas 8 but I am unsure as to adding things to this site.

The American Theatre was a single screen theatre until late 1972 when it was acquired by the McConnel Theatre circuit. When it reopened in early 1973 it was a Twin Theatre and operated as a twin until it closed in late 1974 or early 1975.