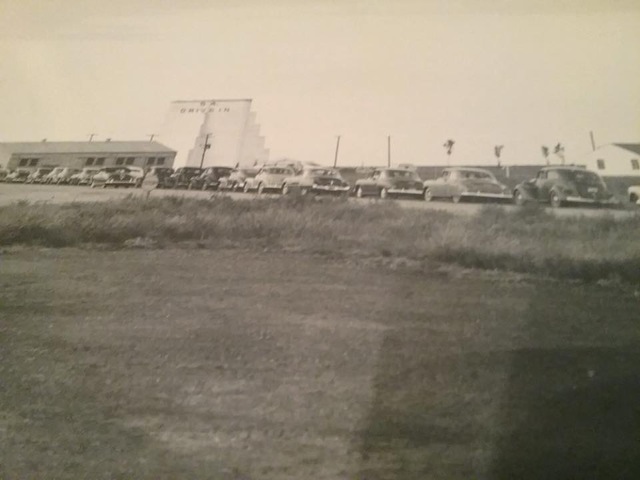 The 54 Drive-In was opened October 28, 1948 with Errol Flynn in “Silver River”. In the advertising section of the Guymon High School El Tigre yearbook is a large display advertisement for the 54 Drive-In, along with a sharp focus photo of the Moderne style screen tower.

Since the 54 Drive-In advertisement ran seperately from the downtown American Theatre and Royal Theatre, it can probably be safely assumed that they were independent of one another.

This drive-in was located where the Best Western Plus is now. The screen faced away from the highway (where the actual suites are located now). If you look closely at aerial maps, you can still see a partial imprint behind the motel. Approx. address is 1102 NE 6th Street.

Its first appearance in the Theatre Catalogs was the 1949-50 edition, which lists it as a 430-car theater, nine-month season, seven days a week. By the 1984 International Motion Picture Almanac, it was gone.

Since many were interested in the story yesterday about the Long Theatre, I found this story from 2007 about the drive-in in Guymon.

Editor’s Note: The following article was taken from the memories of Ferol Riggs, Betty Aaron and Billie Grabeal, daughters of the late Lewis and Sylvia Long.

A more accurate address for this theater is 601 US-54, Guymon, OK 73942. This points directly to the entrance road. Behind the Best Western (which is where the screen was located), part of the actual entrance road still exists. Some ramps though barely visible are also there.

After looking at a 1995 aerial photo and a 1970 topo map, the entrance road for the drive-in did not extend to what is now the rear of the Best Western. It was considerably shorter and most of it is now paved over with the rest covered by the hotel. The dirt area on the east side of the hotel was never a road.

What is interesting from looking at the topo map is that it marks what appears to be the ticket booth, concession stand, and projector booth. But there is a fourth building on the south side of the drive-in that has no immediate explanation. It was still present in the 1995 photo.