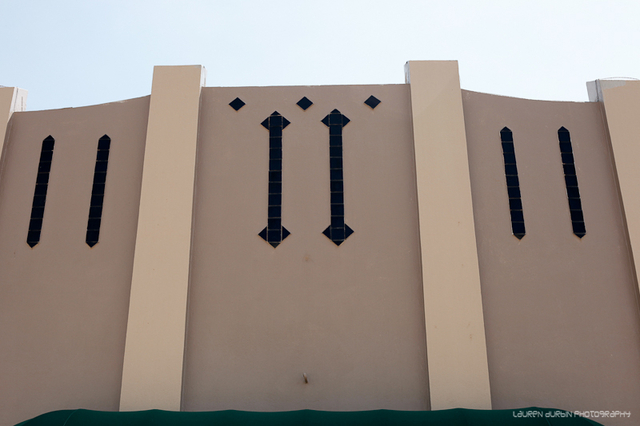 In the 1983 lettering on the King Theatre’s marquee said "closed for repairs." The white building trimmed in red was reminiscent of a castle. It had the familiar pointed marquee sheltering the entrance and topping the marquee was "King" in large red letters highlighted with neon.

It reopened as the Indie Cinema in July 2015.

A 1983 photo of the King Theater in Tishomingo.

Still standing on Main Street, off Neshoba, the King Theatre has lost its marquee, but is recognizable on photo right.
View link

Address looks to be 114 W. Main Street based on the address of the business next door.

The King has reopened as the Indie Theatre with a seating capacity of 146. The address 114 West Main Street, Tishomingo, OK 73460 and the website is http://the-indie.com/index.html

The Thompson Theatre opened with 464 seats in August of 1939 by Glen Thompson which replaced the original Thompson Theatre which had opened in 1936 but was burned on January 3, 1939. The 300-seat theatre was the Princess Theatre which Thompson also operated through October of 1950. On October 15, 1954, the theatre converted to widescreen projection to present CinemaScope films beginning with “The Robe.” It may mean little, but ads discontinue at the 20-year mark of the theater.

A timeline of events in Tishomingo says that the rebuilt Thompson Theatre opened on July 20, 1939.

Boxoffice of September 18, 1978 said that Joe, Midge, and Jim King had sold their King Theatre in Tishomingo to Gary Gill.