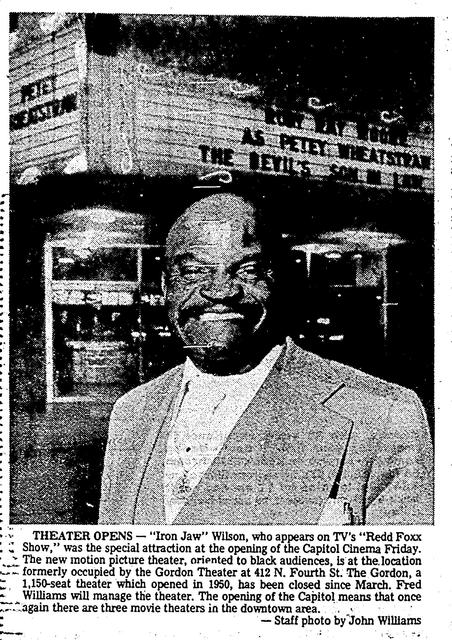 The Gordon Theater was opened in 1951, showing first run movies. It was in a stand alone building with the entrance and marquee being on the left front. Above the entrance was a box shaped marquee and a vertical sign stood above the marquee with red letters spelling out "Gordon".

The Gordon Theater was renamed Capitol Theatre in 1977, and closed as a first run movie theatre in 1985.

A 1974 photo of the Gordon Theater in Baton Rouge showing “The Way We Were” starring Robert Redford.

The Gordon was located a 412 N 4th and later became the Capitol.

Boxoffice of August 26, 1950, announced that ground had been broken for a new theater on N. 4th Street in Baton Rouge. The house was being built for Gordon Theatres Inc., a local chain headed by Gordon Ogden. Architects for the project were the local firm of Bodman & Murrell (Ralph Bodman and Richard Murrell.) The house was expected to be open by January 1, 1951.

The successor firm to Bodman & Murrell, Bodman, Murrell, Landry & Webb, designed at least one theater that would be operated by Gordon Theatres' successor firm, Gordon-Perry Theatres, in 1964. There was also an intermediate firm called Bodman, Murrell & Smith. Other theaters might have been designed under one or another of the firms names, but I’m having a hard time tracking down information about them. Boxoffice has very few references on the subject.

The Gordon operated as part of the Ogden-Perry theater chain as a successful first run house until mid-1976. “Logan’s Run” and “Family Plot” were the last big pictures to play during that time. It was a large house with a balcony. For the remainder of that year and part of the next, it was a $1.00 house, showing second runs and recent classics. In late 1977, the operation was transferred to a local circuit specializing in black-themed films and renamed the Capitol Cinema. It ran into the early 80’s (for a few years after the nearby Paramount and Hart had become parking lots) and was closed by 1984. The building was converted into law and other offices and still remains in that capacity today.

I remember seeing “Fantasia” there. It was a nice theater.