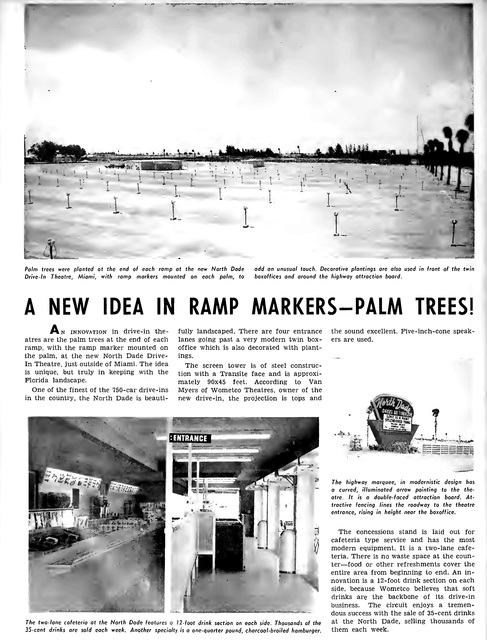 This drive-in was owned and operated by the Wometco chain from its opening on April 27, 1956. The opening program was Ernest Borgnine in “Marty” & Gregory Peck in “The Gunfighter”. Wometco Theatres closed the drive-in in 1986. It had a capacity for 765 cars.

A shopping center was built on the site of the drive-in.

This drive-in opened on April 27th, 1956. Grand opening ad in the Wometco ad is at View link

See “THE CHEERLEADERS” was released as an R rated movie,must have been cut.1977 ad.

The above address will map accurately to the location of the drive-in, which was in Miami Gardens near the Miami-Dade County line. While the street address in the heading is correct, the town and zip code is not.

I am not sure how CT handles this, but the city of Miami Gardens did not exist when this drive-in was in operation.

There’s a lot I could say about this theater that was for about 14 years, my home away from home. I lived on the West side down 171st street, at the corner of 34th Ave. My family moved to Carol City at the very beginning of having been established as a community. In a symbolic way, the North Dade Drive-In and I started out together. What I’ve always remembered about the North Dade Drive-In were two individuals who helped run the theater. The first was the gray-haired, rather distinguished looking manger, always dressed in what looked like a tuxedo. The old-man managed the theater until he suffered a heart-attack and then was replaced. Second, and perhaps the most popular was the blonde curly haired lady at the snack-counter by the name of “Bonnie.” During the many years she worked behind the counter, either passing out drinks, food or at the register, she would become a remarkably recognizable figure, so strongly associated to the drive-in.

Like it is with any neighborhood theater, going to the drive-in was a weekly ritual. If not with my family, we’d go every Saturday night with other neighbors, pouring ourselves into the back crowded seat of a station wagon or even a neighbor’s truck! It was always an exciting time, come Saturday night, meeting up with other friends, who were also making it a weekend routine to see a movie at North Dade Drive-In. It’s always been interesting to me that while growing up and going to the theater, I also learned or was exposed to various aspects of life. The drive-in and whatever movie was showing was as much a learning experience as it was being at home in front of our little black and white television set or those times at school. North Dade Drive-In was a place that allowed all of us growing up in Carol City, a window to view the outside world on a grand scale. It was a world that for all intended purposes was mostly “make-believe” and was basically an escape all of us sought, looking forward to this refuge the drive-in offer us.

Perhaps the biggest of all exciting times at North Dade Drive-In was the annual 4th of July fireworks display. This event turned out to be for many kids who lived in Carol City and the adjoining communities, the very first time we saw a real pyrotechnics presentation. I remember the combustible devices, place at the bottom front of the big screen, being lit one by one, flying fast and high into the night sky, lighting up the big screen in reflective colors. I imagine the homes around the theater enjoyed the fireworks, as did people many outside the perimeter of theater, in park cars who freely watched as the night sky colorfully lit up that area of 27th Avenue.

What a wonderful time those long ago nights were for us growing up in a community that was pretty much a rather forgotten, if not, out of the way corner of Dade County. Yet, the glory or supposed dominance of the North Dade Drive-In for the area was in some ways closely shadowed that year of 1956, when North Dade opened for business, after the eariler opening of the grand and even bigger Golden Glades Twin drive-in. What made this situation of the Golden Glades Twin significant for my family was being only two blocks from where we lived. With two big screens and close access, naturally this brought on some decision making and debates among the neighbors on where to go for that Saturday night. What gave the twin drive-in an advantage from the perspective of the kids was its playground facilities that the North Dade didn’t have.

Another wonderful occurrence to remember about North Dade Drive-in was a few of those traveling carnival magic shows and the occasional “Ghost-Horror Show” hired as an extra attraction. The most memorable of these shows that were part of the promotional publicity for a film was the one that included the classic horror movie “Black Sunday.” This was about the only time the drive-in would be filled to capacity having to turn away automobiles and then simply allowing people to walk-in. These traveling shows certainly succeeded in giving the neighborhood excitement and something to talk about at school with friends after the weekend romp.

Of all the films that I can remember having seen at North Dade, perhaps the most memorable experience was the big Paramount Pictures musical version of “Li’l Abner.” What made this showing at the drive-in so special was a rare, Wometco Enterprise “first run” of a major motion picture at one of their local drive-in theaters! Instead of having to drive down-town to see the movie in the air-condition comfort of a big theater, we received the opportunity to have the movie smack-dab, right in our own neighborhood! Interestingly, about a month later, when the film went into general release, “Li’l Abner” showed up at Golden Glades Twin and most everybody I knew went again to see the movie. There had to be this competitive spirit between both Golden Glades and North Dade being so close to each other.

My life in Carol City wouldn’t have been so fruitful and splendid had it not been for those delightful nights I spent with family and friends at North Dade Drive-In. Yet, on a sad note, one of my childhood friends that I went to the drive-in with passed away recently. One of the first things I thought about in association to the passing away of my friend was this drive-in that for me has come to represent numerously special, admirable memories that I experienced growing up. It might sound a bit melodramatic or archaic, but that Drive-In was in so many ways a part of my life and a second, beloved home that offered me at times a magical atmosphere beyond all of life’s simple and chaotic phases. I consider myself lucky to have had the place a part of me and will remain so until the day I leave this earth.

Opened with “Marty” and “The gunfighter”. Site is now Dolphin Plaza Shopping Center.

Link with a 1968 article about the Wometco Air Conditioning with photo.

The Carol City Drive in Theater was wonderful. I remember that you could see the movie on the big screen while driving west on the Palmetto Expressway. Thanks for the memories. By Gregg L. Friedman MD