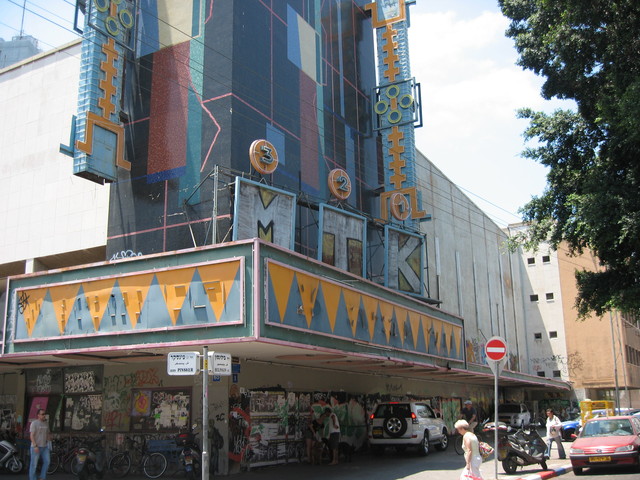 Planned in 1949, construction began in August 1955. The Fox Theatre was opened in the heart of Tel-Aviv in 1956, and for many years was the biggest single screen cinema in the Middle East, boasting over 2,000 seats. It was built by 20th Century Fox in order to showcase their own productions. It had a huge stalls area of 1,200 seats plus 700 seats in a two part circle. The stalls area was situated under street level while the circle and projection booth were above street level. You had to go down if you wanted a seat in the stalls, or climb up to the circle.

It was a very lavish theatre, and if it would have stayed open it would still be, even in today’s standards. It had a rising tower above the box office with the title of the theatre and the movie playing on it and it gave the people in Tel-Aviv (then not such an Americanized modern city as it is today) the feeling that this theatre was an actual part of America.

The location, not far from Dizengoff Square was (and still is) very central, and everybody who was anybody in those days was there: In the coffee shops around the theatre, the shops, the cinemas and other famous establishemnt in Tel-Aviv in those days. This made it at the time one of the busiest theatre’s in town, THE place to see movies.

The Tel-Aviv Theatre had a huge red curtain which was raised at the begining of every show, usually part of the Fox logo already screened on it while it slowly ascended revealing the curved screen. All seats were red and very comfortable, a big change from most Tel-Aviv theatres at the time which used hard wooden seats. It was also the first theatre in the country to install a sterephonic sound system. During it’s glory days it showed famous Fox movies such as “Cleopatra”, “The Sound of Music”, “Hello Dolly” and also other studios big productions such as “My Fair Lady” and “The Towering Inferno”. In 1977 it was also the place where “Star Wars” opened in Israel.

The decline of the theatre started already in the 1970’s when it started to screen action movies and only every now and then opening with a big class A hit such as “Superman” or “Star Wars”.

In the begining of the 1980’s it was sold to private owners who continued to screen mainly action movies. But in 1982 it saw the Israeli opening of “Blade Runner” and in 1984 “The Terminator”.

In the late 1980’s it was sold once again, this time to the Golan-Globus Group of Cannon Cinemas, which operated the theatre until the closed it down in 1998. Before that they tripled it, leaving the huge circle area as Screen 1, projecting the movies on the theatre’s original screen downstairs, while the area under the circle was gutted to two very small screens.

In 1998, after opening an 8-screen multiplex in a new shopping mall the Globus group decided to close the Tel-Aviv Theatre for good.

The building was demolished in 2011 and a new skyscraper will be built on the site.

Well,we certainly need another skyscaper.thanks Rani for caring enough to get this theatre on.