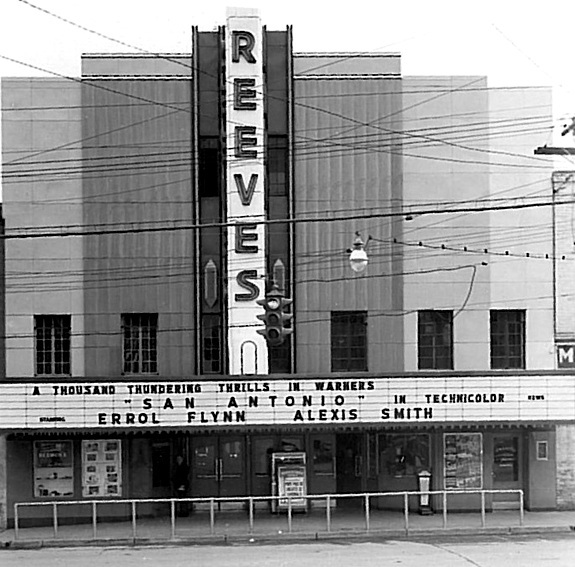 A donations jug that had been on a local bookstore’s counter that had been placed there to collect money to help restore the Reeves was recently stolen: View link

Thanks Chuck,hope the theatre was saved and not a parking lot.

The NRHP nomination form for the Downtown Elkin Historic District (PDF here) has a paragraph about the Reeves Theatre. It says that Dr. W. B. Reeves built the 300-seat Elk Theatre in 1937, and built the 700-seat Reeves Theatre in 1941 after realizing that the town could support a larger house. It doesn’t say that the Elk Theatre was on the same site as the Reeves, but doesn’t say it wasn’t. It’s possible that part of the original theater was incorporated into the new house.

This article from the July 2, 2012, issue of The Winston-Salem Journal says that the Reeves Theatre had been entirely gutted in preparation for a renovation as a performing arts space. Even the balcony had been removed. The Elk Twin had closed in 1994, after a storm damaged the roof.

A video and a collection of 19 photos accompany the article. Most of the photos show the abandoned building before it was gutted, but a few are after. One after photo shows that the original art modern facade has also been stripped off of the building, leaving bare brick, though the marquee is still intact.

This brief item from October 24, 1940, issue of The Elkin Tribune makes it sound as though the Reeves Theatre was not to be built on the same site as the Elk Theatre:

“Of considerable interest was the announcement Monday by Dr. W. B. Reeves, who owns and operates the Elk Theatre, that he is planning to build a new and modern theatre on West Main street next to the Duke Power Company, having purchased that property, and the W. M. Allen property upon which is situated the building housing the law offices of Mr. Allen and Hoke Henderson, and the Elkin-Jonesville Building & Loan Association. This building, it is understood, will be torn down to make room for the new theatre, work on which will start sometime in the near future.”

Renovation is again underway at the Reeves Theatre, and the venue could be opened by summer of 2016, according to this illustrated articleposted by the Elkin Tribune on July 17, 2015.

Here is an update on the Reeves Theater in Elkin, North Carolina. Please stop in and enjoy this new and exciting live music venue, which also includes a bar and cafe serving farm to table menu items… learn more at www.reevestheater.com and watch this video that was on UNC-TV recently: https://video.unctv.org/video/reeves-theater-and-cafe-mzcdbb/

And yes, the Elk Twin and the Reeves Theater are the same building…The theater was once for movies, now it has been renovated into a live music venue.