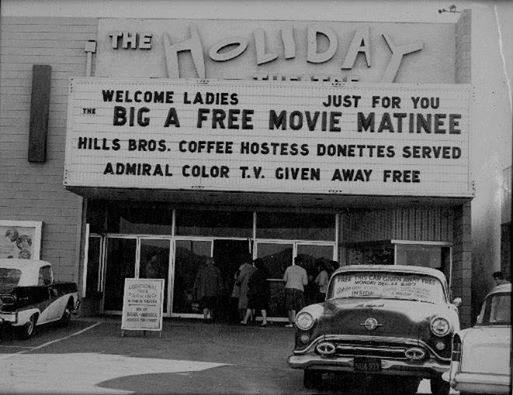 The Holiday Theatre was opened on April 4, 1962 and was similar to a single screen version of the multi-plex theaters of the 1970’s. After the Holiday Theatre closed in 1981 it was gutted to become a hardware store.

I have to look up the year order of operations for it. But it was operated by a third Century chain. In 1969 Statewide Theatres Circuit, Inc. (Amusement Corporation of America) sold their theatre holdings to Loew’s Theatres and after afew years sold them to GCC. And on some of them they were sold to the SRO chain.

wow I’m surprised to find this theater listed up here, i thought it was long forgotten. I used to ride my bike (as a kid) from the end of Devonshire to this theater and remember seeing things like “Orca”, “Laserblast” and “The Crater Lake Monster” here. Sometime in the early 80’s i can remember taking my grandmother to see a double bill of “Blade Runner” and “Dragonslayer” here. Yea i remember it as a dingy dive as described above, interesting it was owned by the old Criterion people. Few people remember the Santa Monica Promenade back in the late 70’s/early 80’s when it was a ghost town with closed down businesses and homeless., the Criterion was a seedy cheap dive then as well. i think i prefer it that way. Things will probably revert to the way they were on the course we’re going.

I think this was the Holiday in 1984:
http://tinyurl.com/yckojzw

John P. Filbert was a contractor. The architect of the Holiday Theatre, according to his entry in the 1962 AIA directory, was William N. Bonham.

I used to ride the RTD from Sherman Way/Topanga from Our Lady of the Valley back in ‘79-'80. I remember this theater as it listed its films as .99 Even as a fifth grader, I wondered how could they make money!LOL I do remember way later going in to Performance Auto Wholesale which was a major mail-order performance parts catalog store which featured multi-page ads in Hot Rod and other such magazines (way before the internet took hold) with my friend to order headers for his Dodge Ramcharger SUV in the same building.

Are you sure about the address 8483? The business next door was listed as 8366 Topanga Cyn Blvd, which would make this 8372, which is the Iglesia Apostolica Monte De Los Olivos church.

So why does everyone think it was across the street?