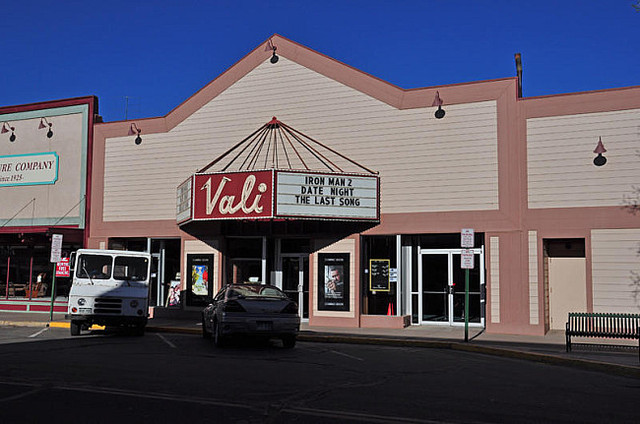 The 575-seat Granada Theatre was operating by 1941 when it was operated by the Atlas Theater Corp. chain. It was renamed Vali Theatre in November 1965.

Here is a view of Adams Street, Monte Vista, CO looking north in 1942. The Granada Theatre is on the left and a comment states the building is still there, but not what its current use is:
http://flickr.com/photos/mikerosebery/942362301/

The Vali Theatre was rebuilt in 1971 after being gutted by fire. The rebuilt house seated 407 and was designed by Mel Glatz & Associates, according to a November 29, 1971, Boxoffice item which also said the opening was set for December. The January 4, 1972, issue of Boxoffice said that the new Vali had opened on Christmas Day. It was apparently still a single-screen house. The Vali was independently operated by George and Edna Kelloff, who were brother and sister.

The burned Vali was indeed the same theater as the Granada, which was closed by Atlas Theatres in 1965 and reopened as the Vali in 1966, according to the February 7 issue of Boxoffice that year.

The Kelloff’s mother, Susan, was herself in the theater business for forty years. When she died, in 1967, an item in the November 20 issue of Boxoffice said that she had opened the Princess Theatre at Aguilar, Colorado, in 1925, and when it burned the following year rebuilt it as the Colorado Theatre. At the time of her death her son Mitchell was also an exhibitor, operating the Uptown Theatre in Pueblo, Colorado.

I think the two photos Lost Memory linked to above are both the same building. Note that the arrangement of windows and doors on the left side is the same in both photos, but the more recent photo shows that the building has been expanded on the right side, probably to accommodate another auditorium. I would surmise that the storefront next door was adapted for this purpose, and the two buildings then unified with a new facade.

Here’s a correction to my comment above. I’ve come across a source which says that George and Edna Kelloff were husband and wife, not brother and sister. The 1967 item about Susan Kelloff said that she was survived by her sons George and Mitchell and daughters Edna and Rose, but either the Edna reffered to was Susan’s daughter-in-law or George married another Edna.

I also found a 1948 Boxoffice item which might explain why George and Mitchell’s 1947 plan for a theater at Monte Vista was abandoned. The well-heeled Atlas Theatres circuit, operators of the Granada, announced plans to build a 1000-seat theater in Monte Vista, and to keep the Granada open as well. That was probably enough to discourage anyone from attempting to build a rival theater. But the Atlas project was never carried out, of course. Still, George got the last laugh when he took over the Granada after Atlas closed it.

This theatre was closed for a year or so. Due to fabulous community support, the theatre has re-opened staffed completely with volunteers. They show one current movie at 7:30pm on Thursday, Friday and Saturday evenings.

Boxoffice, Dec. 6, 1965: “George Kelloff, Star Drive-In, Monte Vista, has taken over operation of the Monte Vista Granada Theatre. The house was operated by Atlas Theatres prior to its closing several months ago. At the theatre, now to be called the Vali, Kelloff is installing a new screen, new marquee, new front, new snack bar, as well as carrying out a reseating and redecorating project.”

Boxoffice, April 18, 1966: “(George) Kelloff, after remodeling the former Granada Theatre, reopened it Christmas Day under the name of Vali.”