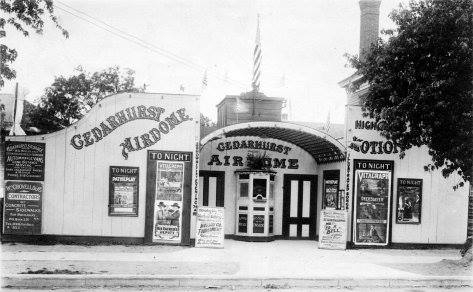 The Airdome was opened prior to August 1913 and was operated by C.H. Pyatt who operated the Lawrence Theatre in Cedarhurst during winter months.

The Airdome has been demolished to make way from an entrance to a parking lot.

Here is another photo of the Cedarhurst Airdome, this from the August 2, 1913, issue of The Moving Picture Age. The operator of the Airdome, C.H. Pyatt, ran an indoor theater called the Lawrence during the winter months.

This book, The Five Towns, by Millicent Vollano, features the photo of the Airdome Warren linked to in an earlier comment, and its caption says that it opened in May, 1899, and featured vaudeville as well as movies.

The book also has a photo of the Playhouse (probably from around 1924, the year the theater opened) and says that it was located on Spruce Street. While the building does resemble the central section of the building that La Viola Restaurant now occupies, I’m sure they are not the same structure.

Both were designed in what I would consider a vaguely Mission Revival style (the book mistakenly calls the Playhouse building Art Deco, which for many people has apparently become a catch-all descriptive phrase for any theater architecture from before about 1960) and though the two buildings are similar, there are differences that could not have been remodeled away. The belief that the restaurant was formerly the Playhouse must be an erroneous local legend.

I think we can also lay to rest the idea that the Playhouse was built on the same site that the Airdome had occupied. The photo in Five Cities shows the building next door to the right of the theater and it had no resemblance to the structure adjacent to the Airdome in the Moving Picture Age photo. The building next to the Playhouse was small and flat-roofed, and looks like it was a frame structure. It also looked old enough that it would not have been a replacement for the more substantial masonry structure seen next to the Airdome in the 1913 photo.

I have that Vollarno book about the 5 Towns (and I also live in the area). She states that the Cedarhurst Airdrome was demolished to make way for an entrance to a parking lot. Based on the photo (and another one in the book looking down Spruce Street toward the Cedarhurst LIRR station) and the above information, I’m pretty sure the Airdrome was located on the left side of Spruce as you walked from Central Avenue toward the RR station. The parking lot she refers to is the lot for the stores in the small square-shaped mall that now has the CVS, the karate place and some other stores.