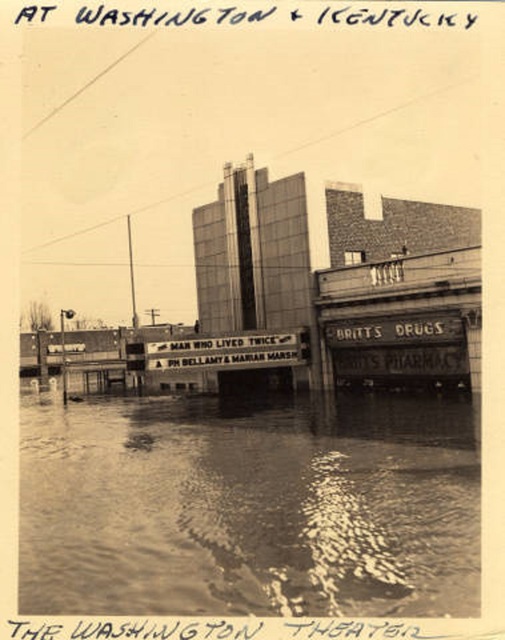 Located on the east side of Evansville. The Washington Theatre was opened November 24, 1936. In later years it was known as Cinema 35 and closed in 1983. It was demolished in 1988.

The site mentioned on 5/13/08 has added some new photos to its collection:
http://tinyurl.com/ca7ovq

It looks like the Washington Theatre has been demolished. The only structure on the odd-numbered side of the 900 block is a neo-colonial style building which the Internet lists as the location of Old National Bank, 961 Washington.

There are a couple of early photos of the Washington Theatre near the bottom of this web page, from Willard Library. The caption of one says that the theater opened on November 24, 1936.

The February 21 (not 25,) 1966, Boxoffice item about the Cinema 35 that I linked to in my previous comment has been moved to this link.

The Washington Theatre/Cinema 35 closed in 1983 and the building was demolished in 1988 according to this page at Historic Evansville. The “View all images” link on that page fetches several additional photos of the theater, including an interior shot of the spacious auditorium. There is also a Sanborn map from 1962.

The Washington was run by the local circuit, Premier Theatres, for many years, but in 1965 was taken over by Ted Graulich, operator of the Family Drive-In at Evansville. He took over the Ross Theatre at the same time.

After remodeling the Washington, as reported in Boxoffice, February 21, 1966 (page one, with auditorium photo, page two with marquee photo), Graulich renamed the house the Cinema 35. Seating had been reduced to 605.