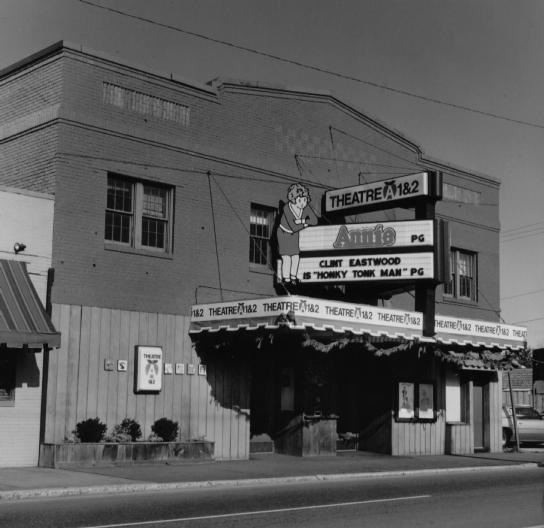 The Rosedale Theater designed by Fowler & Karges was opened on February 27, 1928 with Laura Le Plante in “Silk Stockings”. The Rosedale Theater was closed in 1957 and began use briefly as a church. On November 16, 1958 it reopened as Theatre A. It was sold to Cinema Southwest in 1973 and began screening X Rated movies in 1975. It was closed in 1977 and was twinned, returning to first-run movies. That lasted only a year. The building is currently home to a restaurant known as "The Pub".

Google Maps is off base again. The pin icon on the map looks to be about half a mile west of the theater’s actual location. Street View is from the adjacent expressway, not from the street itself. After I updated it, I discovered that it is possible to get a view from Division Street itself, but only by moving the view eastward, then going off the expressway via an on-ramp just east of Willow Road, then doubling back along Division Street.

This reopened as “Theatre A” on November 15th, 1968. Grand opening ad in photo section.

On February 10, 2014, the Evansville Courier & Press posted this obituary of Larry Aiken, who had renovated the Rosedale Theatre into the Theatre A. At the same time, Aiken launched The Pub in the building next door, intending it as a place where theater patrons could get a drink before or after the show, but The Pub proved so popular that it eventually displaced the theater.

THIS THEATRE HAD TWO SCREENS IN 1982

Opened Feb. 27, 1928 with Laura LaPlante in “Silk Stockings.” It converted to widescreen to show CinemaScope films but that didn’t stem the tides as the theatre went down to three-day a week operation in 1956 and closed in 1957. It was used as a church and for sporadic events until being emptied out for a refresh and relaunch on November 15th, 1968 as Theatre A.

It was sold to Cinema Southwest in 1973 and converted to X-Rated fare in 1975 before closing. In 1977, it was refreshed as a twin-screener playing first-run fare. That failed within a year and it was converted to The Pub.