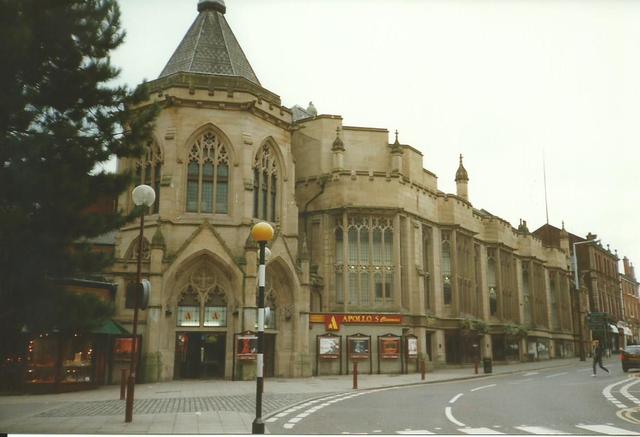 The Cotton Exchange was built in 1865 and was designed in an Ecclesiastical (church) style by a Mr Breakspeare. Used as a multi-purpose hall, travelling film shows were held here. In late-1918 it became a full-time cinema, known as the Exchange Picture Hall. The projection box was located inside the tower on the corner of the building.

On 31st March 1924 it was re-named New Majestic Cinema and was completely re-furbished by architects L.H. Maxwell and G.G. Dickinson with a seating capacity of 1,500. Taken over by Associated British Cinemas(ABC) in 1932, they modernised the building’s interior and re-opened it in October 1932 as the Majestic Cinema, with a reduced seating capacity of 1,400 in stalls and circle levels.

The architectural firm Drury & Gomersall renovated the cinema in 1953 and it was was taken over by an independent operator, becoming the first cinema in East Lancashire to screen "The Robe" in CinemaScope, from 7th June 1954. In December 1955 it was taken over by the Essoldo circuit of Newcastle and re-named Essoldo.

Further renovations were carried out in March 1967 when it was taken over by the Classic Cinemas chain, and re-named Classic Cinema. It was tripled in March 1976, with the former circle seating 316 and two screens in the former stalls seating 186 and 256.

The Apollo 5 Cinemas closed on 22nd December 2005, unable to compete with the new Vue multiplex which had opened in the town. In late-2006, the interior of the building was gutted, revealing original stonework, the stage, many stained glass windows and a rose window, all of which had been covered over in 1924 when it became the Majestic Cinema. The building is being converted into a mixed retail and restaurant use. In Autumn 2015 it was announced it would receive a £5million revamp to become a centre for the arts, culture & business. The former Cotton Exchange Hall is a Grade II Listed building.

A vintage postcard view and details of the Cotton Exchange Hall:
View link

During the 1980’s I undertook a photographic study of Blackburn for the Arts Council. Here are a selection of images made showing the, then, three auditorium and the projection room showing projectionist and equipment. I have also included an image of one of the rooms that show the Majestic Cinema/Essoldo/Classic/Apollo 5 cinema’s former life as a Cotton Exchange

One of hidden rooms office from Corn Exchange

Hi Christopher, we’re the new owners of the old Apollo Cinema and would love to have as many images as possible, preferably in high res. Would this be OK? These images are fascinating, but could you tell me which image is of which screen? My email is .uk. The website is www.resourceblackburn.org.uk