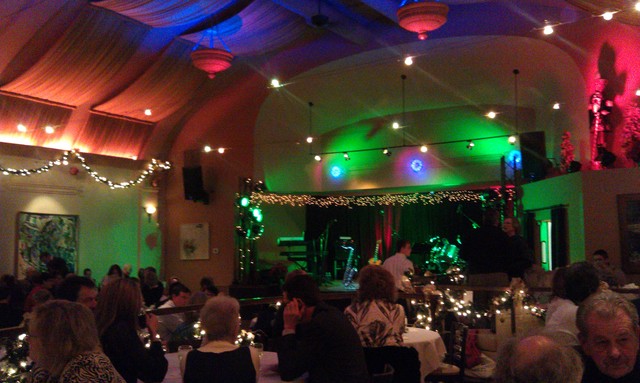 Opened as the Broadway Theater on November 5, 1923. It was renamed Indiana Theater in 1934. From the 1970’s this theater last operated as Cinema Blue, an X-rated theater which closed in 1985. The building became home to a restaurant in 1998, called the Catablu Gourmet American Grill.

In May 2009, it became a jazz club known as The Philmore on Broadway. By 2017 it was an entertainment & events venue.

Here is a little bit of history concerning the theater formally called the Cinema Blue, located in Fort Wayne, Indiana. The information is mainly a compilation of old newspaper articles from the Fort Wayne Journal Gazette and the Fort Wayne News Sentinel.

The Cinema Blue originally began as the Broadway Theater which opened on November 5, 1923. The newly built Broadway Theater was to develop a reputation for showing the best silent movies in a pleasing atmosphere. The building had a stage, an auditorium that had an arched ceiling which provided better ventilation and acoustic properties, contained an orchestra pit and three sets of balconies, it could seat 600 people, the ladiesâ€™ room provided space for parking baby buggies, and the screen was made of the best gold fiber. The film featured at the Grand Opening of the Broadway Theater was Back Home and Broke starring Thomas Meighan, a poplar leading actor of the time. Everyone attending on opening day was given a rose (New Broadway Theater).

In 1934 the Broadway was sold and renamed the Indiana Theater. According to an article from the Fort Wayne Journal Gazette its most prosperous years came immediately after World War II. Between March of 1941 and May of 1956, the Indiana Theater offered the â€œTake a Chance Nightâ€. The name of the picture wasnâ€™t advertised, but admission was 10 cents for everyone. Business boomed on those nights. On November 9, 1969 the Indiana Theater closed. Since its opening in 1923, the theater had shown family movies exclusively. The last family picture shown at the Indiana was The Hellfighters starring John Wayne (Pond).

On December 19, 1969, the theater reopened under the name of â€˜Theater A.â€™ In a Journal Gazette newspaper article of the time, the new owner noted that his establishment will avoid what he termed â€œhard-core pornography,â€ but will probably show several European award-winning films (Pond).

By the 1970â€™s the theater again changed names. It became the Cinema Blue. The theater now showed pornographic movies. It was closed in 1985 after reaching a plea agreement with the prosecutors.

After the theaterâ€™s vacancy, several attempts were made to make use of the building. However, these attempts were unsuccessful and the theater was left to deteriorate. In 1997, several Fort Wayne area businessmen financed the theaterâ€™s restoration and renovation. Much of the original Broadway Theater interior was restored including the stage, three balconies and orchestra pit. The theater had now become an upscale restaurant named the Catablu Gourmet American Grille.

The Catablu Gourmet American Grille restaurant moved out of the building on May 29, 2009. Happily, the Old Broadway Theater now lives on as jazz club and an event center called â€œThe Philmore on Broadway.â€

Please note that this is no longer a operating movie theater and therefore there is NO SCREEN! It is an entertainment venue.

The April 7, 1923, issue of The Fort Wayne Sentinel said that excavation had begun for the Broadway Theatre. Local architect Henry W. Meyer had designed the project.

The November 4, 1923 (the day before opening) issue of the paper carried a full-page ad for the theater, boasting of its dual Powers projectors, its advanced heating and ventilation system, its gold fibre screen, and the Fotoplayer that would provide music and sound effects for the silent movies. The ad also described the Broadway’s seating accommodations

“The seats are placed on a terraced cycloid circular incline with each seat facing the exact center of the screen, and from which the patron has a clear View of the picture over the shoulders of the parties in front.”