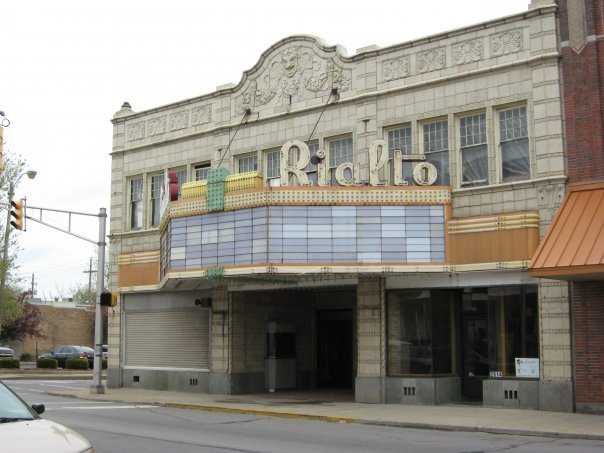 Here is a brief history of the Rialto Theater:

*1979: Mallers-Spirou closes the theater and puts it up ‘For Sale’.

*1982: New local owners buy theater and reopen it as a pornographic movie house.

*1993: The city names the Rialto a locally designated historic district.

*2003: Local group The Reclamation Project buys the theater. Members will make it a center for theater, the arts and urban ministry. This never happened.

Very nice Story Jack. I just purchased the Original Candy Machine from the Theatre. I own a company, Memory Lane Restorations and today, I found the paper work inside the candy machine, pined to the side. So i looked up the history, hoping to find some inside photos of the theatre, with the Candy Machine in it. Any help, would be great. 301-991-3532 My name is Curtis.

It’s nice to hear from you. The Rialto had three of these wooden candy machines. It appears that yours has since been modified to handle larger items. In my day, they had nickel and dime coin slots and, if I remember correctly, each machine could dispense eight items. Of course, the bigger selling items would occupy two columns. The best sellers were Milk Duds, Dots and Good and Plenty.
These machines were in use before the Rialto had a concession stand. Even after the concession stand was put in, the candy machines did a brisk business because they sold all the boxed candy. The concession stand sold only bagged candy. The Rialto bought bulk candy from Huser-Paul, a local distributor and the “concession girls” would count candy pieces and bag candy between “rushes” at the counter. (No plastic gloves either in those days, just bag candy, sell popcorn, make change and bag candy!)
Unfortuantely, Curtis, I don’t have any pictures showing the machines. There were two machines on the main floor, one on either side of the drinking fountain. If yours has water stains on one side, it was one of those two. The third machine was in the balcony. It had much less use since the balcony was only open when the main floor was nearly filled on weekends. If your machine has no water stains, it was probably the one from the balcony.
I’d be interested in knowing where you’re located and how you came to possess the machine. I probably filled it many times. They were extremely reliable vendors, probably because everything was in uniformly sized boxes.

I have obtained the pertinent info regarding the photoplayer and apparently not much is left… I have already purchased part of it. The other remaining parts have all been sold to other buyers via Ebay.

Thanks for the trivia on my Great Uncle Nick and Great Aunt Laura. Laura was a wonderful letter writer who died Nick’s undershirts red long before men wore colored underwear. She was a woman of great verve and imagination, and he was equally inventive. I think you mean “Bessie,” not Little Lulu, though. There’s an framed, autographed copy in my parents' den.

Mimi, you’re so rightâ€"it was “Bessie.”

According to the Reclamation Project website (link in the description at top), the first phaser of their restoration has been completed.

This brief article appeared in the April 10, 1942 issue of The Film Daily:

“Fort Wayne, Ind. — Remodeling of the Rialto Theater, Calhoun and Pontiac Sts., is under way, to cost approximately $8,500 and be completed about May 1, announced George Heliotes, manager. The project will allow additional foyer space by eliminating most of an adjoining storeroom. A. M. Strauss is architect.

“Included in the remodeling will be a new stairway to the balcony, a new lounge and foyer, new men’s lounge and rest room in the basement, and air conditioning. Michael Kinder & Sons has been awarded the general contract.”

Records kept by Alvin Strauss’s successor firm, Strauss Associates, indicate that Strauss prepared plans for alterations and additions to the Rialto in 1936 (commission #694,) but the project might not have been carried out until 1938 (commission # 726.) Two rolls of blueprints dated 11/6/36 were found bundled with plans for the 1938 project.

In 2015, the building was put up for sale. It is still vacant. http://www.journalgazette.net/news/local/Historic-Rialto-Theater-up-for-sale-10380564