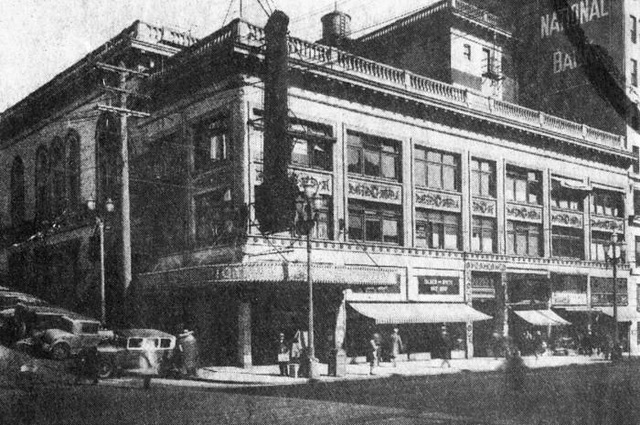 Opened as the Majestic Theatre around 1910, in 1911 it was renamed Hippodrome Theatre and was later known as the Palace Hip Theatre and in 1919 was remodeled to the plans of architect Thomas Lamb. It became the Palace Theatre, one of Seattle’s most popular vaudeville theaters. It was converted into a parking garage in 1930 and the building was demolished in 1981.

There is a photo and more information about this theater at this site. Enter theaters as a search term and browse the photos. The picture of the Palace Hip is on page 6 of 7 (not to be confused with 7 of 9, for all you Trek fans):

This photo of 2nd and Spring, which Flickr user Rob Ketcherside dates to ca.1911, shows the Palace-Hip building in place, but the marquee says Majestic on it.

Robert Grau’s 1910 book “The Business Man in the Amusement World” has a few paragraphs about vaudeville impresario John W. Considine, including the following lines:

“In his own city of Seattle, Mr. Considine is one of the financial, social and political powers. He is giving his city beautiful buildings, such as the new Majestic Theatre which is declared the finest vaudeville structure in America, and the new Orpheum Theatre, to be ready for business by September 1st.”

A photo of the Majestic appears a couple of pages later (scroll down in the Google Books scan.)

The photos show that the theater was at the southeast corner of 2nd and Spring (2nd Avenue is fairly level, but Spring Street runs sharply uphill east of 2nd.) The Majestic most likely opened in 1910, and certainly no earlier than 1909. I’ve found references to the Hippodrome Theatre in Seattle as early as 1912, so the name must have changed no later than that year.

I saw that on the vertical too.

Wish there were interior pictures of this great historic theatre. I just remember the elaborate exterior smoldering for years. Also of the interiors of the Winter Garden, Embassy, Colonial, Roosevelt, Alhambra and Blue Mouse in Seattle.

According to this page at ArchitectDB, the Majestic was designed by Seattle architect Edwin W. Houghton. The house only remained a theater until 1930, when it was gutted and converted into a parking garage. The building was demolished in 1981. The 43-floor office building now on the theater’s site was completed in 1987.

ArchitectDB says that Sullivan & Considine renamed the Majestic the Empress in 1911. The various Empress Theatres were included in the sale of Sullivan & Considine’s holdings to Marcus Loew in 1914, as reported in The New York Times of March 27. However, the Majestic/Empress ended up being operated for several years by the Ackerman & Harris circuit as the Palace Hippodrome before finally becoming Loew’s Palace Hip by 1921.

The acquisition of Sullivan & Considine’s holdings made Loew’s the largest vaudeville circuit in the United States, even though a number of S&C’s houses were parceled out to other chains, including the Orpheum and Pantages circuits.

Linkrot repair: The PCAD page about the Palace linked in my previous comment is now at this link.

Engineering News-Record of October 23, 1919, said that Loew’s Enterprises planned to spend $150,000 for alterations to the Palace Hippodrome Theatre in Seattle. This seems to have been about the standard amount Loew’s spent on refitting the big old theaters it acquired during this period. Plans for the project were, as usual, prepared by Thomas Lamb’s firm.