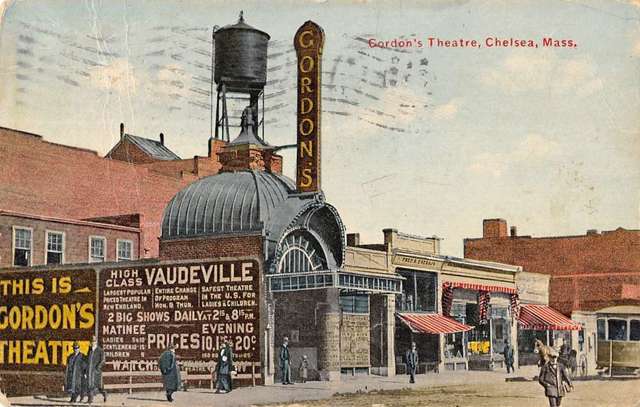 I found this theatre mentioned in the diary of a friend’s family member. From New Years to Easter 1926, she went to the silent movies there with her friends - "Calgary Stampede," "Wizard of Oz," "Clothes Make the Pirate," "The Splendid Crime," "The Arizona Sweepstake", "The Night Cry," “Rainbow Riley," "Grand Duchess and the Waiter," "Made for Love," and "Under Western Skies."

There were actually four movie theaters in Chelsea, perhaps not all operating at the same time. The first theater you would come to walking from Bellinham Square was the Broadway, situated on the right side of Broadway. Across the street on the second floor of a business block was the Chelsea. Further down Broadway on the same side as the Broadway theater was the Olympia (just after Allen’s Cut-Rate Perfumes. Finally there was the Strand theater in Chelsea Square on the left side of Broadway-in the same block as Bloomburg’s Furniture Store. All of them were gone in the 1960’s replaced by a theater in the shopping mall off Webster Av. known as the Parkway Plaza theater.

The Olympia in Chelsea is listed in the 1927 Film Daily Yearbook as having 800 seats and open daily. I don’t know if that seat count is correct. The 1927 FDY lists 2 other movie theaters in Chelsea: the Broadway with 1,000 seats, open daily; and the Strand with 900 seats, also open daily.

An old postcard of the theatre http://www.oldpostcards.com/o/opr001149.html

Link to images I mentioned years ago, page 125 has a picture of the Gordon in the distance, Olympia marquee and: View link

The April 7, 1909, issue of The Moving Picture World has this item in its “Notes of the Trade” column: “Chelsea, Mass.â€"The Gordon Amusement Company, of Boston, has had plans prepared for the erection of a large vaudeville theater here.”

The same year, a letter from Local 7 of the Bridge and Structural Iron Workers Union was pusblished in the October issue of trade union journal The Bridgemen’s Magazine, listing a theater in Chelsea among the projects then underway on which the Chelmsford Iron Company was doing structural and/or ornamental iron work. Given these dates, it’s likely that Gordon’s Theatre opened in late 1909 or early 1910.

The November 15, 1913, issue of The Moving Picture World said that the Gordon interests had taken control of the Empire Theatre in Chelsea, and would operate it as a movie house. Gordon’s Theater would present stock company shows. The changes had been scheduled for November 10.

The theatre partly sat on the property of this building destroyed during the Great Chelsea Fire of 1908: http://www.olgp.net/chs/d4/graniteblock.htm

The Theatre Historical Society archive in Illinois has the MGM Theatre Report for the Olympia Th. in Chelsea. Listed at 376 Broadway, it was in Fair condition, and had been presenting MGM films for over 10 years. It had 820 orchestra seats, 475 balcony seats, and 125 seats in the loges; total: 1,420 seats. There is an exterior photo taken in April 1941.

This is a rarity for the demolished theatres remnants of the theatre are still visible as the theatre’s basement was filled in while everything aboveground was demolished. Some bricks still stick up out of the ground at the edges of the property.