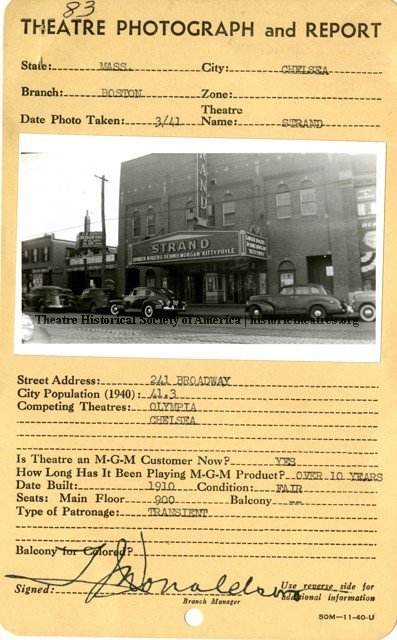 A single screen neighborhood theatre built during the early to mid-1910’s. Originally called the Empire Theatre name changed when it was bought by the Strand Theater chain.

The Strand Theatre continued into the 1940’s and was still operating in 1950.

Open till ~1955? Can anyone verify the exact dates?

Online yearly reports from the Chief of the Massachusetts District Police who inspected theatres and movie cinemas in the state shows that in 1914, the first year individual theatres and their inspections were reported, Empire Theatre Company held the license to operate the theatre. 1917 that license is held by the Chelsea Olympia Company who operated Gordon’s Theatre.

In 1920 it is stated that the license is held by the Star Photo Company and the theatre is named the Strand Theatre.

Found online a revenue state report that the Empire Theatre Company was incorporated in 1912 so I assume this is the year of it’s opening as a vaudville/movie theatre.

It’s listed as the Strand Theatre, with about 900 seats and open 7 days per week, in the 1927 Film Daily Yearbook.

The Strand in Chelsea is listed in the 1942-43 Motion Picture Yearbook as part of the Marget Theatre Circuit, 53 State St. in Boston.

Aerial view of Chelsea shows it is still standing in 1955

sorry about link, type in the address and then click on the 1955 photo and it shows it still standing

The Theatre Historical Society archive in IL has the MGM Theatre Report for the Stand in Chelsea. Listed at 241 Broadway; in Fair condition; built about 1910, showing MGM product for over 10 years. 900 seats. There is an exterior photo dated March 1941.