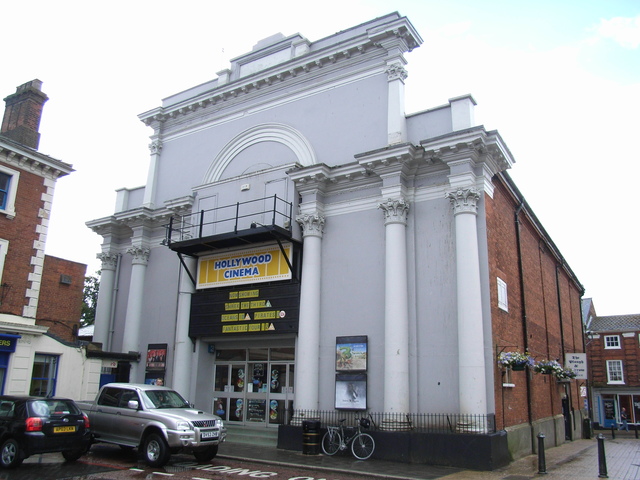 The Corn Exhange was built in 1857 and has a frontage with Corinthian columns. It has operated as a cinema from the 1930’s and was re-named Exchange Theatre by 1947 when the seating capacity was given as 700.

In 1961, the building was sub-divided with the stalls area becoming a dance hall and the circle remaining as a cinema.

It became a 3-screen cinema, operated by the independent Hollywood Cinemas circuit. Sadly, it was reported on 7th February 2019 that the Hollywood Cinemas circuit had been put into administration. Owner Trevor Wicks said the reasons for this demise included “a very poor 2018 with the ‘Beast From the East’ (extremely adverse weather in February/March 2018), the Football World Cup and the long, hot summer, plus high levels of competition in the local area and a number of poor-performing films in recent months”.

Two of the circuit’s cinemas in Great Yarmouth & Norwich were closed (although the administrators are looking for buyers), but in happier news, this one at Dereham was quickly acquired by independent exhibitor Lee Allwood, who operates the Orion Cinema, Burgess Hill, West Sussex. He kept it open during the transition, safeguarding the staff, and it will be re-named Orion Cinema.

Originally a single-floor affair but a balcony was added probably during the 1930s. Colin Aldis leased it from 1965 to 1992 using his initials in the name CBA Cinema. It operated as a bingo-hall between 1973 and 1976 when Aldis took over the Memorial Hall to screen films. Trevor Wicks took over in 1992 and it became the Hollywood Cinema.