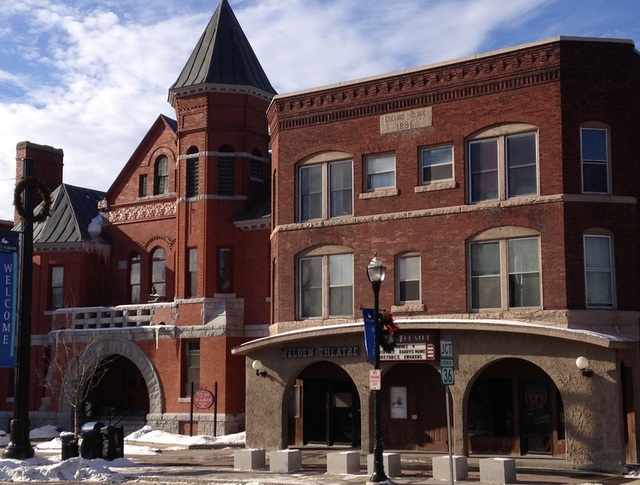 This theatre is just north of the former Bellevue Theatre in the center of historic St. Albans. The building looks like a miniature version of an armory. I was cycling through on a trip and it was rainy, but tons of families were there for the afternoon showings.

The building is three stories with three arches in front. Folks can wait under the arches before entering. There are red decorative poster holders on the sides.

The building dates to 1895 as the block above the cornice says (and on other town buildings) "Collins Block 1895".

The alleyway on the right side clearly shows the red brick of the theatre and the auditorium which goes downhill slightly.

The Theatre Historical Society archive has the MGM Theatre Report for the Welden; it’s Card # 591. Address is 104 Main St. There is an exterior photo dated April 1941. Condition is Good. It says the theater opened in 1935 and is not showing MGM films There were 500 seats. Competing theateres were the Empire and the Bellevue, but a report was done only for the Empire, and not for the Bellevue. The 1940 population of St. Albans was 8,000.