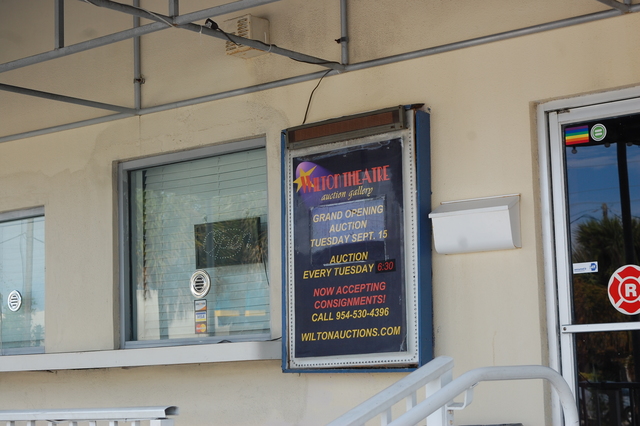 Opened in 1971 as the Manor Theatre, this sub-run theatre eventually became one of Broward County’s premiere arthouses. It saved many from making a trip to Miami and closed in 1987. Until recently, it operated as the 26th Street Theatre, a live theatrical venue, but is now once more closed. It is in use as an auction house.

Carlos Cyrulnik: If you were in art film-starved Broward County during the early 1980s, you had him to thank for proving the local market would support imports ‘n’ indies.

Beginning with a revival of “Seven Beauties,” Cyrulnik gradually built up enough audience to warrant newer releases that would’ve once required a trip 40 miles south to Coral Gables or Coconut Grove. But even long-unavailable classics played to sold-out houses: Broward was so hungry for the likes of “La Dolce Vita” that some hardy souls (with sturdy soles) stood in the back all three hours.

In retrospect, the Manor Art Cinema witnessed the crossroads between the late work of arthouse mainstays (Kurosawa, Truffaut, Fassbinder) and the first rumblings of the American independent scene (“Kiss of the Spider Woman” and “The Road to Bountiful” both had extended engagements). The Manor Art was also kept busy at various times with a Thursday night discussion series, often tied in with the next booking, along with midnight adult movies on weekends and late Monday Chinese films (patronized in great numbers by restaurant workers on their regular evening off).

Although small in seat count, the Manor had a rectangular orientation that facilitated a decent (and curtained) wide screen. “Dersu Uzala” and “King of Hearts,” among others, were well served.

To accommodate additional films, Cyrulnik eventually assumed management of another former bargain cinema further west, the Towne in Plantation /theaters/12462/ Both theatres thrived for a few more years, until a shortage of must-see new releases led to the Art Towne’s demise in 1987. The Manor turned to revivals again in its final months, and closed the way it began, with “Seven Beauties.”

Longtime South Florida theatrical producer Brian C. Smith oversaw the Manor’s changeover to live performance, reopened as Off-Broadway at 26th Street. Coral Springs' Stage Door Theatre assumed management for a time, but what is now the Wilton Theatre has been shuttered in recent months — except for Tuesday-night auctions:

Correction: “The TRIP to Bountiful.”

Forgot to mention the Manor’s pre-art cinema life in the 1970s as a primarily neighborhood theater, sometimes first-run but mostly second-run bargain fare. I visited once at the time, with a school group watching “Fiddler on the Roof” in anticipation of our own class production… little knowing I would be back quite often a decade later.

For all its success with “La Traviata,” “Kiss of the Spider Woman,” and “The Gods Must Be Crazy,” the Manor’s most successful booking was a revival of the X-rated “Caligula.” Brought back at least twice.

The Thursday Night film discussion series held at the Manor Art Cinema and also at the Art Towne Cinema in Plantation, FL (also owned by the same owner, Carlos Cyrulnik) circa 1982-1985 was called “The Film Forum: An Examination of the Film Experience.”

The “Film Forum” was the creation of host, director, scholar Arch Angelus Sturaitis, an artist/writer originally from Canada who moderated a weekly discussion with headliner directors, actors, producers, movie critics and a wide range of experts expounding on the featured films being screened at the theatres.

South Florida premieres of “Say Amen Somebody”, “Siberiade”, “Gabriela”, “Heart Like a Wheel”, “Land of Look Behind”, Berlin Alexanerplatz", “Gaijin” among many, many other memorable Foreign/International films attracted unprecedented full house audiences of more than 300 patrons.

The Film Forum with Arch Angelus Sturaitis was widely covered by the Press: Candice Russell of the Fort Lauderdale News and Sun Sentinel; Bill Cosford of the Miami Herald; Skip Sheffield of the Boca Raton News; Jack Sturdy of the TWN, among others. Many radio and TV personalities also joined with these critics in the annual Oscar Gala Discussion at the Manor, a very popular program for the film crowd.

Are you forgetting that the Cinematheque in Miami had been doing a similar program since the seventies and showed those same film films first?

The “Film Forum” created a promotional and educational venue via the Manor Art and Art Towne that exhibitors acknowledged attracted and fostered an important and valuable audience for these unique and sometimes difficult films, and for this reason, The Film Forum was often rewarded with many exclusive presentation opportunities.

Update information for above. The theater is now the home to the Wilton Auction.

On February 15, 1985 the Manor was showing “STRANGER THAN PARADISE” while the Art Towne was showing three films on two screens. “THE GODS MUST BE CRAZY” in twin one and “BIZET"S CARMEN” and “CHOOSE ME” sharing twin two, but not on double feature.