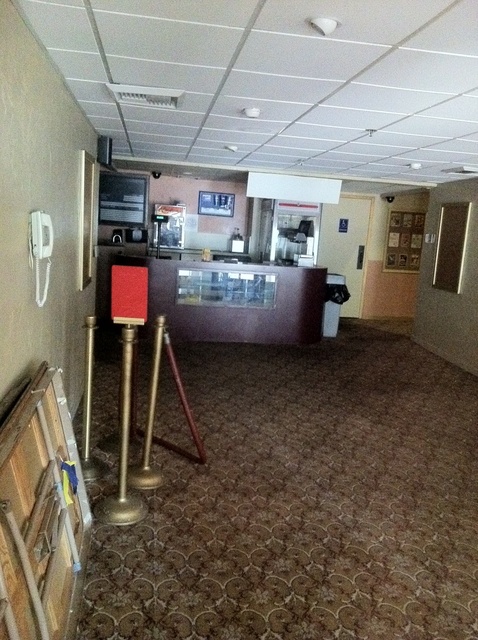 This theatre is said to be "…one of the oldest continuously operated picture houses in the United States."

Since 1916 it has gone through numerous owners, various names, two fires, and an earthquake.

After the 1994 Northridge earthquake, the city purchased the building and through the efforts of citizens and federal and state grants, it was restored.

The City of Fillmore blurb outside the theatre reads: “The Towne Theatre was constructed of reinforced brick in 1918 (sic). The single-screen theatre was used to show silent movies and the stage area was used for vaudeville. Mary Pickford performed here. The theatre was closed due to extensive damage from the 1994 earthquake. The city purchased the theatre and obtained grants from the State Historical Preservation Office to rebuild the historic structure. The Save the Towne Theatre Committee has worked very hard to raise funds for the building’s restoration, which cost nearly $1 million to complete. Now showing GREAT movies nightly, the plan is to not only show films, but to have plays, musicals and lectures upon the stage, as the theatre once did (during) its earlier days.”

For a more comprehensive history of the Towne, see:
http://www.fillmoreca.com/theatre.htm

Additionally, there are 45 seats in the balcony, and 280 seats on the main floor. Went to see “Harry Potter and the Prisoner of Azkaban” the other night and it was packed. Very encouraging.

Here is an LA Times story about post-quake renovations dated 1/19/96:

Two years to the day after it closed, workers Wednesday began the long-awaited renovation of Fillmore’s landmark Towne Theater, which was badly damaged in the Northridge earthquake. Councilwoman Linda Brewster said she hopes to see the theater’s lone screen illuminated by the end of August with a Kirk Douglas movie.

“He has been so supportive of the theater,” Brewster said. The veteran actor has donated $5,000 in cash and thousands of dollars worth of movie memorabilia to raise money for the renovation project.

The theater’s rear wall and roof collapsed in the quake. But thanks to a $475,000 state grant and more than $15,000 in private donations, work to repair the theater got underway Wednesday. “It’s a focal point in the community,” Brewster said of the theater, which opened in 1916. “It’s been here as long as we can remember.”

Aside from the new roof and wall, the theater will get a fresh coat of paint along with new seats and carpet. Meanwhile, members of the Save the Towne Theater committee said they hope to raise another $250,000 to build a live stage in the theater. “It was originally a vaudeville theater,” committee member Lori Hofferber said. “A live stage will make it a really nice theater.”

Theater is closed. As of 2/22/12 the city website reads “Due to budget shortfalls, the Fillmore Towne Theatre has been closed. For facility rental information please contact Annette Cardona at 805-524-1500 ext. 216”