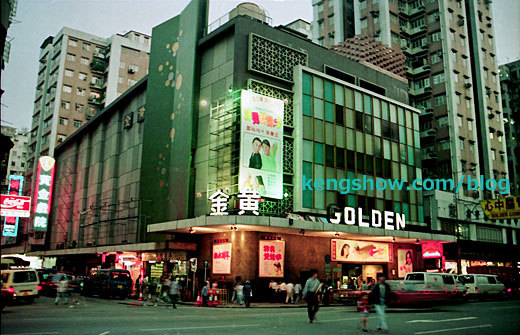 Its 1,397-seat auditorium with a 40-feet wide screen was on the first floor of the theatre building, while the spacious air-conditioned lobby and a mini shopping arcade was on the ground floor.

A residential building with a shopping arcade was built on the site of the theatre.

Golden Theatre was a landmark in the Shamshuipo area and the name is still used around the area a lot. A medium size shopping/residential complex was build on the plot of land surrounding Golden Theatre (see Cineplex Theatre) in the late 70s and the shopping centre in this complex is called Golden Shopping Centre, now a world famous tourist spot for computers and Hi-tech accessories. Golden Theater itself was rebuilt as a smaller residential/shopping complex and the shopping arcade is called “New Golden”, not to be mixed up with Golden Shopping Centre next door. Although the cinema is long gone, “Golden” is still used, particular to minibuss and taxis, to refer to the block the cinema used to stand.

The other cinema names still used for minibus destinations are Royal in Mong Kok and Bonds in Kwun Tong.