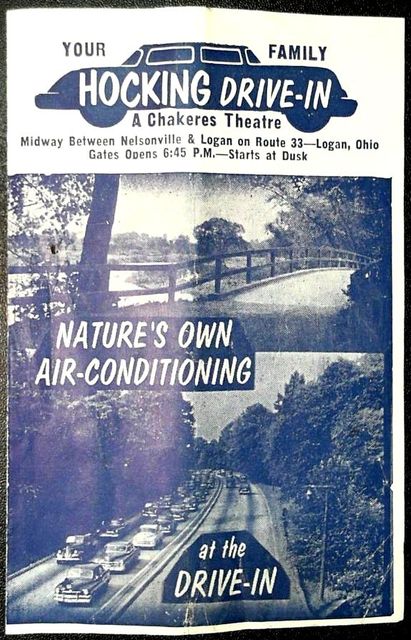 The Hocking Drive-In opened June 18, 1953. It looks like the old marquee and screen were still standing in 2015.

Whats in a name?

Here is another photo. One could say this one is the spitting image of the others, perhaps.
http://tinyurl.com/6ft8gwo

Great pictures.It was a Chakeras Theatre in 1956.

Logan, Ohio is the county seat of Hocking County so when Chaekeres Theatre Circuit opened its drive-in theater there, it went with the Hocking Drive-In Theatre. It launched June 18, 1953 with “Too Young to Kiss” and “Wagons West”.

New Google street view from June of 2018. The original marquee seems to have either been covered up or removed and replaced. The base poles are still there, but a new sign that says “Hocking Theater 33 Event Center” is there. (33 being the major US route that passes directly south of this former DI). The screen has been removed, but the screen support towers still stand and a outdoor pavilion has been built directly in front of those support towers. The building that housed the projection room and concession stand still remains. The street view referenced is from US 33. The Street View mobile has never been down Hocking Drive, the road that the entrance was on. It has been down route 595 back in 2007 and with some searching you can still see the screen when it was up, but not much else.

As Of The 1970s, The Hocking Is One Of A Few Theaters In America To Use The Drive-In As Church Services.