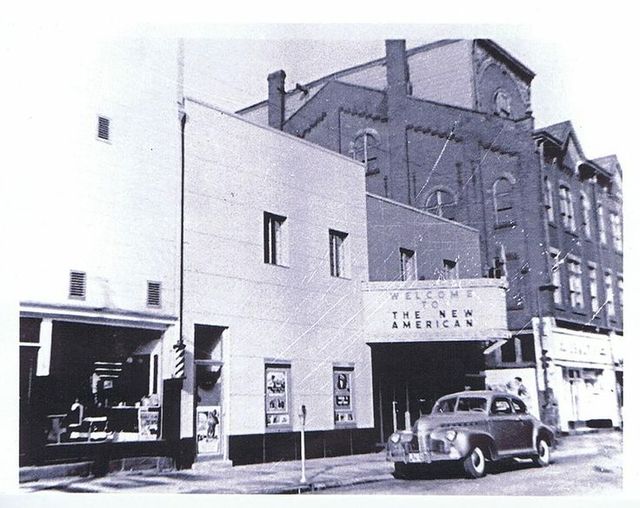 This was a very early theatre – ‘teens. There is a fabulous picture extant showing it in the glory days with patriotic bunting hanging everywhere on the facade. This was the building that was destroyed by fire in the '40s, to be replaced by a cinder block rectangle that had nothing interesting about it except a couple of deco-ish lighting fixtures on the side walls. The 3-rank Wurlitzer organ was installed here and replaced an older Kimball organ – likely a tubular-pneumatic job. The theatre finished up as “Ziegler Hall” that operated as a sort of gospel, amateur night venue for a couple of years before folding and becoming the usual parking lot.

The first image in the photos on this web page from the East Liverpool Historical Society shows the original American Theatre as it appeared in 1914. It is followed by a photo of the second American Theatre.

Another page from the Historical Society features four photos of the destruction of the first American Theatre by fire on May 24, 1950.

Grand opening ad from the original American Theatre December 27, 1909 is posted in pictures. Operator L.J. Herron had motion pictures at the outset mixed in with “clean” vaudeville including a magnet performer who performed healing on opening night. They celebrated the 40th anniversary on Dec. 27, 1949 but there would be no 41st for the original American.

A $200,000 fire on May 24, 1950 destroyed the theatre. It was rebuilt using architect Michael J. DeAngelis’s work and the grand opening ad for the “new” American was on March 17, 1951 is also posted in photos. It wouldn’t reach 50 years torn down in 1999 as the last of the operating movie theaters in downtown E-L

Anybody know anything about a theater in East Palestine named “The American” theater or Lisbon named, “Manos”?! I came across 2 VINTAGE 1940’S Posters at a Estate sell..“ZIEGFELD GIRL W/ Judy Garland and James Stewart is from the Palestein theater the other named "Great American Broadcast” W/ Alice Faye is from the Lisbon one…Movies posters were found in floor boards as I was informed..Have pics of the posters (which are painted VERY Nicely on cardboard poster material…VERY Nice posters and even was replied to from the American Pickers crew about them..They are def one of a kind and I’d like to know more about the theaters if possible..Thanks so much!

dmorrow24:I have added a page for the Manos Theatre, Lisbon. I cannot find any records for an American Theatre in East Palestine. The only other American Theatre listed in Ohio was in Leetonia which has a page on Cinema Treasures.