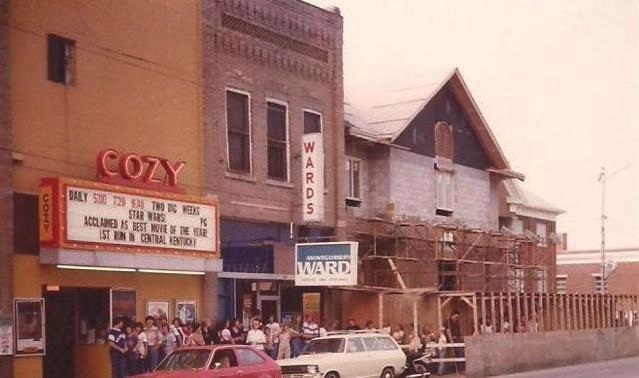 Wayne Wells owned the Cozy Theater in the 1960’s. The current occupant is Cozy Comforts.

I had a friend saw it in June of ‘77 and the impact it had on him was quickly shared, I began a campaign of begging to see it (evil grin!).

It worked, I was able to sweet-talk a grandparent into it when I was actually a bit young for the movie ;)

We always got 2 weeks with grandparents in summer in Campbellsvlle (1 for sure!)… my PaPaw, a WWII POW would not see Rocky with us, he didn’t like violent films.

He sat out Star Wars too, but he was very tired from work that night I think, he had a tough job which also is why he had left Morristown, TN for Campbellsville for a few years. (being a Deacon in the local Baptist church, he may have been obligated that night for church which we spoiled grandkids were not made to go, that night)

I think when my brother, Grandmother and me showed up for Star Wars… the teenagers running the place were disgruntled, think it was a very slow Wednesday evening… we were the first patrons.. they wanted to just close and go home… but, they sold us tickets after initially saying “no”… we were the only ones in the whole theater?… maybe 2-5 others showed up and sat in the lower section.. I seem to remember we sat in a balcony?… I felt like I was flying as the X-Wings tore into the Death Star’s trench from up there! ;)

The Cozy was aging when we went… I remember a seat with duct tape, that I was originally to sit in and my grandmother saw it and we moved to clean, soft seats (whew!).

Even just a year later, we visited there and the theater seemed so small then… maybe it was a re-release of Star Wars?… the magic was gone then though…

… but for that first showing of Star Wars, I was so entranced I had no clue the theater was small, the seats worn nor the sound “not even Dolby”… it was an experience unlike anything I had prior nor since.

My world dissolved away and I was IN the movie those precious minutes of my life in the little Cozy Theater!

Now I’m 45 and work for NASA in combustion devices at Marshall Space Flight Center… I’m still trying to build an X-Wing fighter and mark my words, I will.

I owe George Lucas a big thanks for the fun he gave me as a kid, and I’ll never forget that nor be ungrateful.

And, the little Cozy is a piece of cinema history and my life.

(you are still there in my mind and always will be!)

The address is 305 E. Main Street. The former theatre is currently occupied by Cozy Comforts.