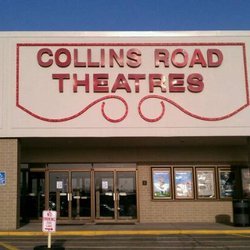 Located in the Collins Square Mall. The Collins Road 5 Theatres opened on December 19, 1986.

A 5 screen theater complex that opened in the late 1980s and closed in 2000. It was later reopened by a local businessman as a second run theater. Ironically, the strip mall it is located in sits on the lot originally occupied by the Twixt Town drive in from 1948-1977.

Ads tout that admission and concession prices are half those found in other local theaters. Host theater of the Annual Cedar Rapids Independent Film Festival. Fully digital and with real butter on its popcorn.

Announced that it will become a first run theatre effective November 2, 2018. https://www.thegazette.com/subject/news/business/collins-road-theatres-to-change-up-business-model-20181024