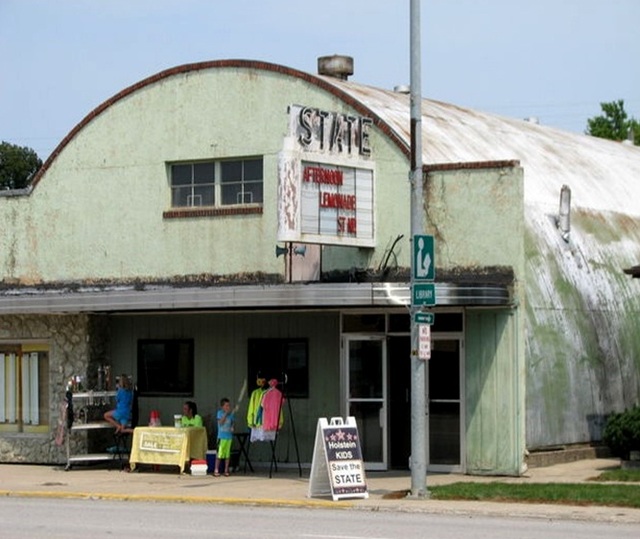 The State Theatre dates back to at least 1935 when it had 300 seats. It was rebuilt in a Quonset Hut style in 1948, opening on September 2, 1948. The architects were Peacock & Belongia of Milwaukee, WI. Seating in the new theatre was provided for 450, all on a single floor. The State Theatre was owned and operated by Mr & Mrs E.W. Kugel. Renovations began in September 2016 and it reopened November 4, 2016.

Here’s a wide view of the theatre from August 2010:
http://www.agilitynut.com/10/9/quonstate.jpg

No showtimes or any official website or facebook page. Is this closed or the owners does zero marketing for this cinema.

Ed Kugel,my grandfather and my grandather’s wife were co-owners of the theatre. My grandfather was Vern Bruning. His wife was Jo Bruning. All lived in Holstein. I saw The Creature From the Black Lagoon as a first run there. My grandfather ran the projectors and I got to watch it from the booth. His, wife, Jo, sold tickets and ran the concession stand. Holstein was such a great place… Lots of nice folks! I remember Ed Kugel because he walked with a bad limp due to a childhood broken leg.

Holstein Development Authority is in the process of refurbishing Holstein’s State Theatre.

Granola’s link is the official web site of the State Theatre. This page of the web site says the house was rebuilt as a quonset hut in 1948, which I would take to mean that the new State Theatre that was opened that year was on the same site as the old house that opened in 1927 as the Scenic.

Theatre is being renovated to open in the fall of 2016. Leather recliner seating has been installed, reducing the seating capacity to 150.

So wonderful to see a Quonset theatre being restored! There were legions of these built after World War II. Trade magazines heralded them as a wave of the future for people wanting to establish new theatres without spending a lot of money. And indeed, for a time the Quonset theatres were a big success, nationwide. Today, there are a scant few remaining, and ever fewer in operation. In California, I only know of the Rio, in Monte Rio, that is operating as a movie theatre.

Here is the State Theatre’s official web site. The grand reopening took place on November 4. So far they are running quite a mixture of older movies and recent releases (Fantastic Beasts is upcoming in December.)