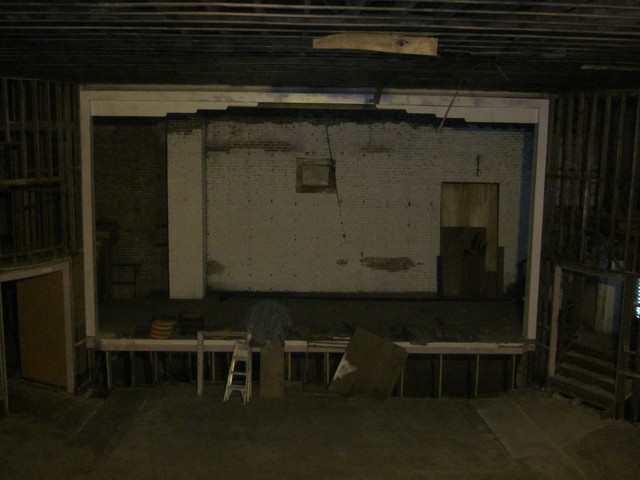 Built in 1935 and opened as the President Theatre October 15, 1935 with Edward Arnold in “Diamond Jim”. It was originally part of the Martin Theatres chain. It was designed by architects McKendree Tucker and Albert Howell of the GA architectural firm Tucker & Howell.

Although the New Georgia Encyclopedia article on architects Tucker & Howell refers to this house as the Manchester Theatre, I think the builder must have decided to name it the President before it opened. Also, it was open by 1935. Perhaps the encyclopedia’s construction dates of 1935-1937 refer to alterations in the latter year?

In any case, an article about the President Theatre appears in the Modern Theatre section of the November 16, 1935, issue of the trade publication, Boxoffice Magazine, with a small photograph of the exterior. It says President on the vertical sign.

The lobby featured a color scheme of red, black and silver, and had a terrazzo floor. Walls and ceilings of the auditorium (which was at right angles to the entrance, and had a small balcony) were covered in custom-made, fluted panels of Celotex (a synthetic board made of sugar cane residue.) The article doesn’t mention a color scheme in the auditorium.

The article names Oscar S. Oldknow, of Atlanta, as the owner of the building. Oldknow had become vice president of Fox Theatres in 1930, but I’ve been unable to find how long he remained associated with that company. By 1936, he had a house in Bel Air, California, which had been designed by theater architect S. Charles Lee. I don’t know if Oldknow had moved to California permanently by that time, or was prematurely bi-coastal.

I just noticed that although the President website gives 111 Broad Street as the address, and their map on this page shows it in the block north of 2nd Street, the Google Maps link places this address south of 3rd Street. Somebody in Manchester needs to get on Google’s case about their mis-location of the town’s addresses.

The link previously posted is incorrect. The correct website is: http://www.presidenttheatre.com